The Mirage F1 from Aerges is now available for DCS World. 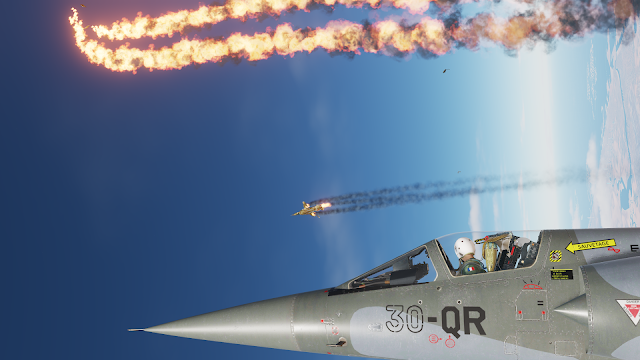 In this entry, a short narrative of my first kill, along with newbie impressions about this virtual combat aircraft.

The Mirage F1 is a single engine French fighter and attack aircraft. First conceived as an interceptor, it has seen many variants and expanded in its ground-attack capabilities.

Going back to 1975, when the F1-CE variant (the first variant available for this module) was first exported to Spain, the Mirage must have been a capable adversary for anything the Warsaw Pact could throw at it. Everything changed, of course, when the Mig-29 entered service.

For demonstration purposes, I'm debriefing you on a absolutely-senseless mission created with the editor. The area of operations is the Persian Gulf. I'm flying solo in a Mirage F1 CE of the Escadron de Chasse 1/13 Normandie-Niémen. I'm armed with 2x R550 Magic (IR guidance) and 2x R530F EM (semi-active radar guided) missiles. Scrambled from Al Minhab airbase as a response to a single Iranian Mig-23 that violated the United Arab Emirates airspace.