A Ship's a Fool to Fight a Fort, Nelson allegedly said. And that's exactly how it feels in this CMO scenario. 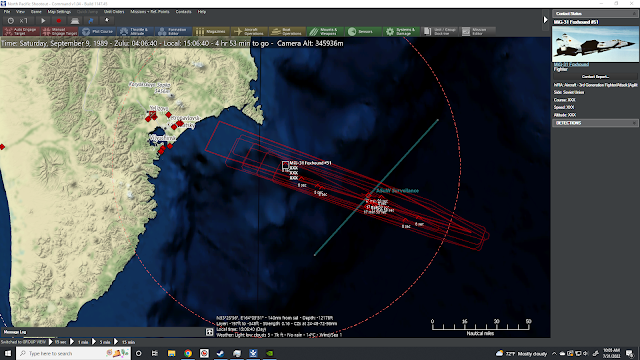 The Soviet Union has stepped up its harassment of American and allied aircraft off the coast of the Kamchatka Peninsula. While the aircraft are operating in international airspace, the Soviets have been performing increasingly aggressive intercepts which last week culminated in a fire control radar from a MiG-31 Foxhound locking on to one of our EP-3s. The Soviets retreated a short time later when F-15Cs from Eackerson were scrambled, however the incident has considerably ramped up tensions between American and Soviet forces in the Pacific.

Satellite intelligence shows a Soviet Kresta II cruiser operating with a small surface action group (SAG) off Petropavlovsk, well out into international waters. Command would like this investigated further, which affords an opportunity to conduct a freedom of navigation exercise to ensure that our aircraft are not harassed while operating peacefully in international airspace. The Ranger carrier battle group (CVBG-61) was enroute to the Persian Gulf but has been tasked north to support this effort and show the flag.

Significant air defense forces are stationed on the Kamchatka Peninsula, including the most modern Su-27 and MiG-31 interceptors of the Soviet PVO. The peninsula is dotted with long-range radars and covered by numerous SA-10 and SA-5 sites in addition to older SA-2 and SA-3 sites. Two regiments of Tu-22M Backfire B bombers are also based in the area.

You are in command of the USS Ranger CVBG, en route to the Persian Gulf. You have support from VP-48 operating out of NAS Adak, while the USAF has kindly made Eackerson AB available for diverts if your aircraft require fuel.

Ready CVW-2 aircraft to provide protection and support as required

Airframes from HSL-49 and HS-14 aboard DD 964 and CV 61 respectively have been designated for search and rescue duties.

USAF aircraft are currently operating out of Eackerson AB, ensure positive identification of any air contacts originating from that bearing.

It is roughly 1 hour after the mission start and the maritime surveillance was shot down by a pair of Su-27s. Given the title of the scenario, I knew the P-3C Orion Update II turboprop would not touch down its wheels on a runway at the end of the day, so I dispatched a flight of 2 F-14As from CV 61. They were on route to join the P-3C and the long bite of their Phoenix missiles chewed their wings into balls of fire.

The Ranger CVBG is more than enough to put a dent on the ENY forces, it is really very rewarding to be in command of the strike and self defense capabilities of its ships and aircraft.

With the hostilities in full fledge now, it would be a shame a defeat to leave those ENY ships off Petropavlovsk untouched. So my plan to strike begins: I will marshal all my strike capabilities and aim for a good kick in the teeth at the ENY surface group and (why not?) Petropavlovsk installations themselves.
They say that most naval action occurs near coastal areas, but today I wish I could drag the ENY onto the open sea, out of reach from their fort.
Cheers,
Posted by JC at 11:10 AM