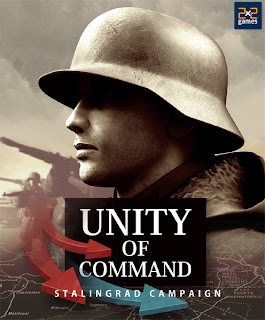 Let me paraphrase the opening paragraph of a professional game reviewer elsewhere. Before I got Unity of Command, I made the mistake of glancing at a few screen shots. They worried me. Those unit's busts instead of NATO icons, the barren interface lacking recognizable buttons for all things sacred in hardcore war gaming, the list of unit's stats shorter than my bank savings account deposit records. Oh no, it's going to be one of those games isn't it? One of those "spiritual successors" trying to bank on the genius of designers of great things we grew up and moved on from? One of those generic turns and hexes "war game light" clones that keep sprouting like mushrooms on a rainy day?

Unity of Command (UoC from here), turned out to be neither. A lean, fast and fulfilling operational level war game with a computer opponent that will hurt your martial ego and keep you in the edge of your seat to the very last turn is the best way to describe it.

This review does not include a detailed description of game features that I think is important for your decision of buying this game or not. Please take a look at my AAR for a closer look of such game features: Part 1, Part 2, Part 3, Part 4 and Part 5. Thanks!


Unity of Command can be played in two modes. The first mode is playing individual scenarios, each of which cover one of the major combat operations by the German Army Group South and the Soviet Southwestern Front from May 1942 to February 1943. Each one of the 17 individual scenarios is playable from one, pre-determined side only. 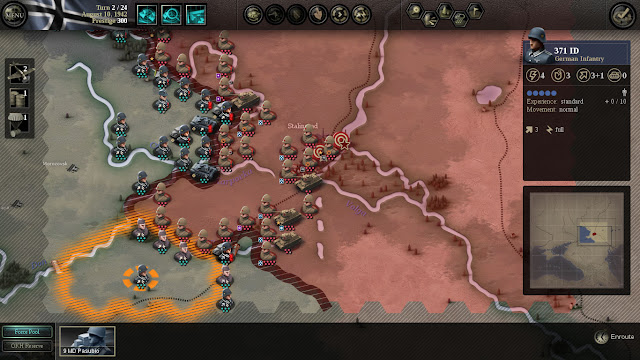 The second mode is the so-called campaign that features a series of linked individual scenarios that are fought in different geographical areas. The path forward for the campaign is branched giving the player the option to choose the next scenario depending the score achieved in the previous one. The scoring in each scenario is calculated adding up points achieved by taking scenario-specific objectives within a certain period of time.  Neither side scores points for the destruction of enemy formations. The emphasis in buying real estate at the right time, rather than in the destruction of the enemy may find you sometimes as the master of the battlefield but short of those movement points to get to an objective held by that lone depleted enemy formation. Victory with a certain amount of score points is absolutely necessary to advance from one scenario into the next one. There is no continuity between each scenario of the campaign in terms of troops (that division you lost in one scenario may re-appear in the next one) or time (all the minor operations between each scenario of the campaign are not featured). Game play-wise the only thing moving along with the player from scenario to scenario is the capability to tap into combat support units, reinforcements for depleted units or new units altogether. This capability is featured by a numeric index named "prestige" and is acquired based in the score obtained in the campaign scenarios. There are two campaigns, one German and one Soviet, off course. 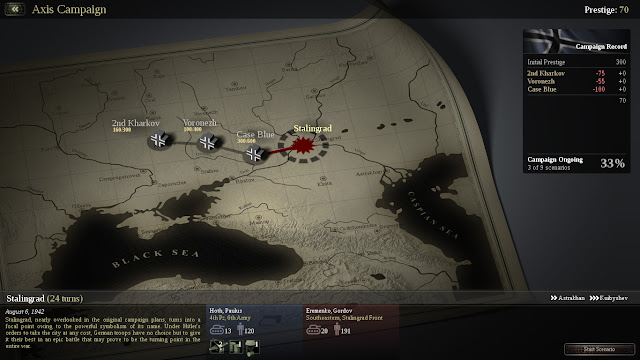 In the scenarios, each individual icon/bust represents a division (German side) or a corps (Russian side). The strength of each unit is represented by steps, which can be active or suppressed. The number of steps is modified by combat and the suppression state of those steps is modified by combat and supply state. There are special steps which represent combat support units (artillery, reconnaissance, anti-tank, anti-air etc). Combat is resolved using a more or less typical combat results table (CRT) and the odds of combat are clearly presented to the player making it very easy to figure out if an attack is worth to try or not. Depending on weather, terrain, armor and combat support units, the attacker and the defender get better or worse odds.The combat system works well in most cases but when it comes to infantry vs infantry combat, it's difficult to punch a hole in the enemy line without air support or a massive reinforcement of combat support units. It is not possible to attack from multiple hexes either, but in the big picture, the combat/operations outcomes appear reasonable. By the way, the player can tap into combat support units by spending his "prestige" points. There is no headquarters units or any type of command and control mechanism in the game, so the player is free to arrange and re-arrange formations at his liking. Many times I found myself unconsciously keeping some German units together for specific tasks like holding a flank, forcing a penetration or sealing an encirclement. Under a closer inspection,  those "groups" ended up looking a lot like corps. 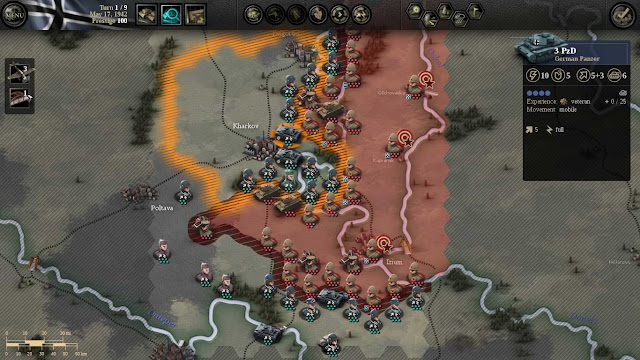 The scenarios play as other I-GO-U-GO turn based games, which each turn representing two weeks of simulated combat and terrain is divided 20 km wide hexagons. Terrain types are very simple (clear, forest mountain, swamp and cities) and they affect the movement of the units. Movement through rivers is possible for any type of unit, yet it takes all the unit's movement capability for a turn. It is off course better to move units through the (very few) major bridges available in each scenario. 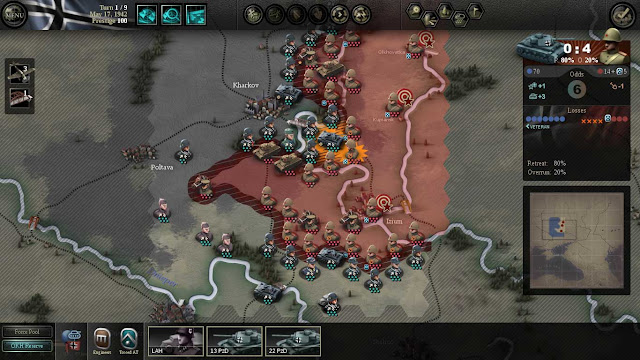 The supply system in UoC is simple, easy to both understand and visualize. Units out of supply will eventually loss their capability to perform combat operations so the player is advised to keep a very close eye on his forces logistics before and during the operations. The relatively low developed railroads in the theater of operations means that both sides will be stretched thin for supplies and that the fights for railroad lines will be ferocious. 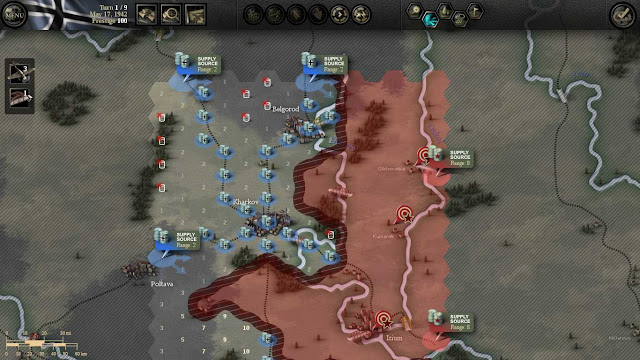 The map, unit icons and all other optional information in UoC looks a lot like an infographic from a newspaper or a magazine. The graphics deliver just enough eye candy to be pleasant and look like a game from the 21st century without being overdone. The maps are clean and the unit icons show almost all the information needed for making decisions. A lot has been written in discussion boards about how good the interface of UoC is. My tongue in cheek take is: what interface? Really, one of the great achievements of this game is to deliver a great war gaming experience without having to too much to click. 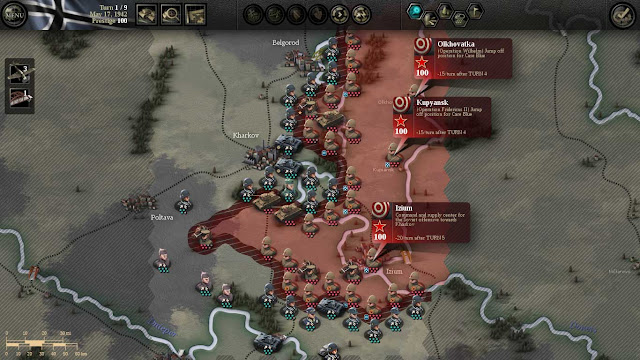 One final paragraph about the computer opponent (AKA AI). This is one of the best computer opponents I played against. In discussion boards elsewhere, the developers' s made no secret that the game may appear simple in some aspects, the scenarios smaller than in other monster games, but they wanted to make sure the computer opponent could cope with all the same variables the human player does. In such venue, UoC doesn't feature fog of war (all enemy units are visible to each side) because the developers couldn't get the computer opponent to deal accordingly with uncertainty (no sh!t guys, information theory is quite a difficult b!tch to deal with). The computer opponent is great both in offensive and defensive operations. It will cut your forces from supply, retreat to better defensive positions, relocate entire armies to threatened sectors and pretty much succeed  almost every time in ruining your best concocted plans. The painful anticipation that I get when I hit that "next turn" button that unleashes the computer opponent has become addictive by now. 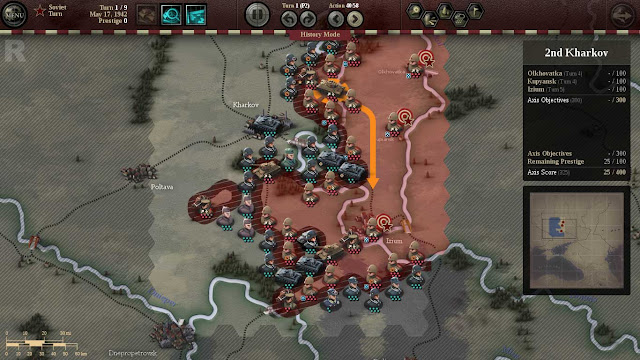 The death of quality computer war gaming was called more than once in the past ten years. I don't know if such a dramatic event will ever happen, but here is what I find most noteworthy about how things changed: there is a growing gap between light, military-themed games and highly detailed simulations of war. This is particularly striking in games depicting warfare at the operational and strategic levels. On the one hand we have the "caricatures of warfare", with moving parts that look very cool and rules that are easy to learn but combined in a game play experience that ends up being just garbage-in, garbage-out. On the other hand, war games so complex and demanding that you basically need to quit your life for two weeks to complete a scenario. Trapped in the middle of these two ends is the player who wants to have a war gaming experience with a minimum of historical verisimilitude, a job and a family at the same time.

Along comes Unity of Command, a game that invents no new war gaming parts or rules but mingles some of  them into a masterpiece of playability, visual appeal, accessibility, challenge and historical edutainment value.

There was something dying in the war gaming world after all, right in between the buffoonery of the simple and the elitism of the complex. It was called clever game design  ... And now it appears to be alive and kicking.

Thanks a lot for this great review! I first learned about UoC on your blog, following your AAR which finally made me buy this game. You strike the point of time consuming monster wargames just perfectly. Also I really do love War in the East, it's often impossible for me to find the necessary time for planning and playing consecutively so that I can emerge into the details and really enjoy this great game (same applies to John Tiller's PzC and Modern Campaigns). UoC just perfectly fits my busy schedule and the AI can be really challenging indeed.

How would you compare the AI of UoC with the one of
Command Ops(Battles from the Bulge), which is also quite famous, no ?

Interesting commentary on the AI. Do you support the notion that artificially augmenting the AI's awareness of the battlespace is an acceptable method of providing a tough challenge for the human player?

The AI in UoC is far more aggressive than the one in BftB. The nice thing about the AI in UoC is that, in addition to the objectives, it aims to your supply lines. The AI in BftB just goes against your objectives.

I don't like when the AI has more info than the player. In UoC there is absolutely no fog of war for neither side, so the AI knows the same things that you do.