The Prairie Fire CDLC for Arma 3 is an outstanding tool for learning small units patrol tactics in jungle environments. 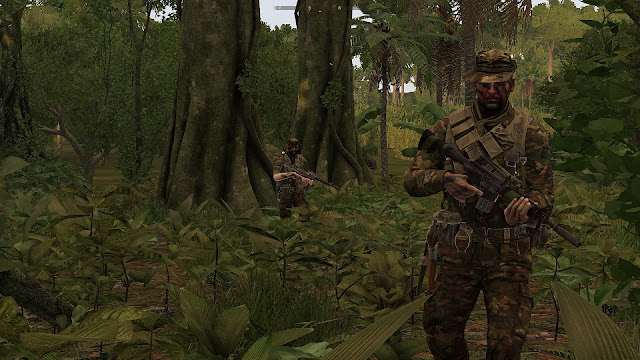 Not that Arma 3 itself was in itself a good venue for that. The Tanoa island from the Apex DLC featured jungles as thick as the ones in Cam Lao Nam. It's rather the gut wrenching feeling of seeing through iron sights, the vulnerability from the lack of body armor ... And the lingering guilt knowing that so many have done this and shed blood for real.

I am a fan of the Urban Patrol Script for setting up patrol missions. Yes, it works in forests and jungles too. But the easy of use of the Tracker Module that came with the Praire Fire DLC is phenomenal. A bit gamey when it comes to the fact that it spawns enemy patrols within a specified area, but in the end what I want is random enemy patrols within an area. And for them to come after my unit when they detect us.

That's basically it! It is just as easy as that.
So I set up for a good run of patrols playing as the US. It turns out that I need to learn a lot about patrol tactics. My blunder du jour: overstaying an area during a short halt and failing to deploy properly during them.

If the noise of a squad walking through the jungle, carrying a lot of gear, and communicating could be heard from further away, it would be a lot more realistic and tense.

But, that's not the case in this game, so you are right... you have to be ready to spray bullets in any direction at a moment's notice.