The fabulous Global Mobilization-Cold War Germany has been updated. New equipment, Flecktarn cammo, the G-36 gun and more! The new vehicles include the Schützenpanzer MARDER 1 AIFV. 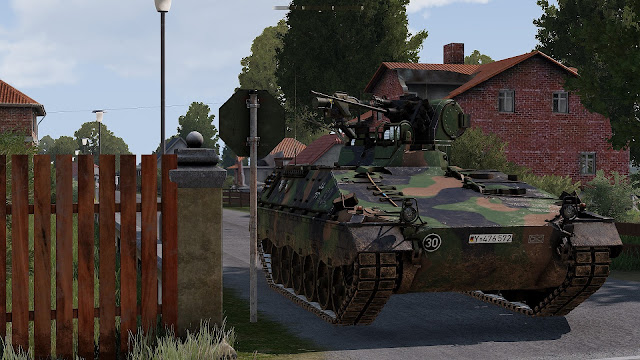 Although this vehicle was available in at least one community mod, I never tried commanding one until the DLC update happened. So I did set up a very short mission (capture a bridge held by a mix of motorized/mechanized Soviet infantry) and I entered combat with my infantry and a Leopard tank providing overwatch.


The Marder is a prime example of a great IFV, I'm now moving into more complicated missions that will demand the correct doctrine.
Cheers,
Posted by JC at 8:27 AM

I need to get this DLC.

There is a new DLC coming down soon:
Arma 3 Creator DLC: CSLA Iron Curtain
https://store.steampowered.com/app/1294440/Arma_3_Creator_DLC_CSLA_Iron_Curtain/
Check it out!

Alltimespost said...
This comment has been removed by a blog administrator.
September 20, 2021 at 3:25 AM

It's a fantastic comment; I'm incredibly astonished by it, and it's quite informative. I'm ecstatic to have finally discovered this website. Thank you for bringing this story to our attention.
ben shapiros sister
lunk alarm planet fitness
green glass door
windows-10-activator

It's a beautiful comment; I'm blown away by it, and it's quite enlightening. I'm overjoyed to have finally found this website. Thank you for drawing our attention to this storey.
thoptv for pc
oreo tv for pc
Kissanime
Download alexa app for windows 10 pc

I read all the articles. I appreciate you and get more knowledge that’s helped me. Keep it up. Thank you so much for sharing thisGreen Glass Door Game
how late is the closest grocery store open
Windows 10 activator txt