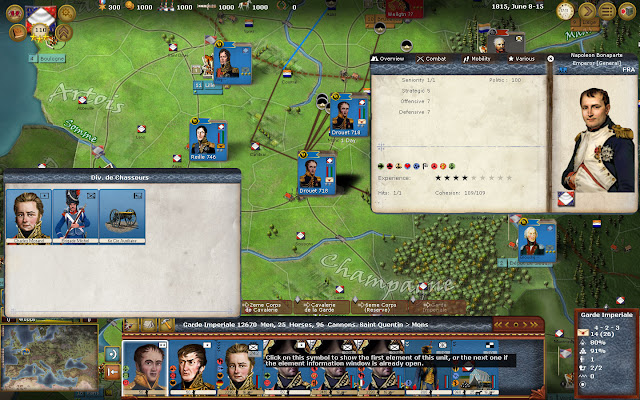 
Wars of Napoleon is the most complete representation of  Napoleonic military strategy that I know of. It focuses in all things military (don't expect a nation-building game like Europa Universalis), from diplomacy, conscription, military reforms, strategical and tactical logistics, blockades, building and organizing armies and fleets, all the way down to maneuvering and deploying armies in the field.


Wars of Napoleon includes 3 small or less complex scenarios (Belgium June 1815, Austria 1805-1806, Prussia 1806-1807) and 2 bigger scenarios (from 1805 to 1815). The latest patch has added a third big "what if" scenario (Sea Lion, 1805-1815). Depending on the specific scenario, the player can assume the leadership of France, Great Britain, Spain, Austria, Russia, Prussia or the Ottomans. The larger scenarios feature the full menu of production, policies and diplomacy options.


The player of Wars of Napoleon is presented with a zoomable map showing Europe, selected parts of the Middle East and North Africa. The America's and their Caribbean islands are represented as inserts on the side of the main map. The virtual world is divided in land/river regions and sea zones. Units are represented as stacks, which are composed of several individual units. Wars of Napoleon looks like a gorgeous board game, with that trademark penchant for artwork that AGEOD has showed over the years. But off course this is a computer war game: the units move in simultaneously-resolved turns that simulate 7 days of virtual time.


Despite the focus on military aspects, Wars of Napoleon (WoN) is still a huge game. A quick glance of the map will quickly show you that a seemingly inconspicuous piece of screen real estate is actually either a clickable icon that brings up some option or  an informational feature. Tooltips are a great asset to help the player to find out what is of interest or not. But when it comes to finding data, you may prefer WoN's strategic atlas with lists of units, ships, production, enacted/optional decrees and laws and diplomatic status.


A comprehensive listing WoN's wargaming goodies is beyond the scope of this brief review. There just too many rivets to count. To give you an idea, I've spent hours just looking at the uniforms in the units' description. How they do that? I can't only imagine the scope of a project like WoN. So, in lieu of writing a book about WoN, does it hold a candle to an era that changed warfare for the centuries to follow?


The answer is yes. The organization of armies into corps, although sometimes hard to handle for  newbies, plays a major role in maneuvering your forces. It's not only a matter of command bonuses but also one of survival. Corps have significant lasting power, which was a major characteristic of Napoleonic warfare. Distributed maneuver is also represented and works pretty well if you have the right commanders in charge of your corps. When the forces are committed into battle, although you don't get a visual representation of in-contact (during battle) maneuvering, you will see forces arriving to the sound of the guns to hopefully save the day.

Divisions, which existence was consolidated during the Napoleonic times mainly as administrative and marching units, are portrayed in WoN too. But as the scale of the game (time and terrain) is shifted towards corps-sized units, so divisions take a back seat into the whole game. And speaking of marching and distributed maneuvering, cramming WoN armies onto a single path results in major traffic jams. There is an optional rule for that but there is no visual representation of it, which is a shame.

And lastly an area where WoN scores big is at the strategic and operational level of warfare. Arguably, the Napoleonic times opened the gate to strategical and operational warfare. Gone were the years where single armies would struggle to find each other. And even when they did, battle was a matter of choice. A typical Napoleonic army pursued battle and frequently succeeded to force it upon the enemy. Even with those battles won, leaders had to think about how those successes would impact their strategic goals. Those are exactly the type of decisions you face in the two large scenarios in WoN. Pick your battles carefully.


WoN is a very well designed game. But I am starting to feel that AGEOD's game design talent has outpaced its game engine. New and all, the Athena game engine struggles to handle big maps (scrolling is a bit clumsy), the release version had its share of unhandled exceptions (a recent patch has removed most of those crashes to desktop) and there were some gaps in the handling of scripted historical events (also improved in the latest patch).  Other area that is being modified by AGEOD is the casualty rates, which sometimes are too high.


AGEOD's game engine, while in paper perfect for this type of warfare, sometimes gets in the way. At least for me, it breaks the narrative during turn resolution with an eclectic cycling through what I suppose are supply, diplomacy and production issues. The engine never tells you what is doing! When the time to simultaneously move forces on the map arrives, the icons with too much speed for a player to appreciate the beautiful story being told. "1e Corps has arrived to Hasselt". That's it. And it shouldn't. One of the things I miss the most from the old engine is the rewind button, a feature now hidden in an obscure place called "the console". The rewind button allowed me to see what happened and how the operation was literally flowing over the map.


Despite the above referenced issues, which I have no doubt will be fixed, this is a solid war game and it won't disappoint Napoleonic fans. It is playable as it is right now (this review is with version 1.02) but stay tuned for further improvements.

Historically we always said in wargaming it not in the graphics and comfort features, it's about the tactics. But lately with so many options in this this genre now, clunkyness and bad graphics aren't going be tolerated.

Well, if you have to fight against a UI and other clunkies I agree.

Fierce Freddy, bad graphics?! ...but have you the eies?! .....Or, like many players, you confuse the 3D with the beauty ?! .... Why a graphics in 3D should be more beautiful of a graphic in 2d ?! .... This game has a very elegant graphics, refined! ..... Because of people like you, today, there are many strategic games with strategic maps in 3D on which it is difficult to play!

I find those graphics and 2D art litteraly gorgeous. The weakness of the last AGEOD 's titles is somewhere else, unfortunately .