Not All Cavalry Are Borne The Same - The Seven Years War, Battle of Kolin

One of the things that is great in this war game is that the tactical battles start with a lot of room to maneuver. A lot of real estate before deployment, and you can use your cavalry units to force the enemy to deploy in a wide front or into a kill sack. 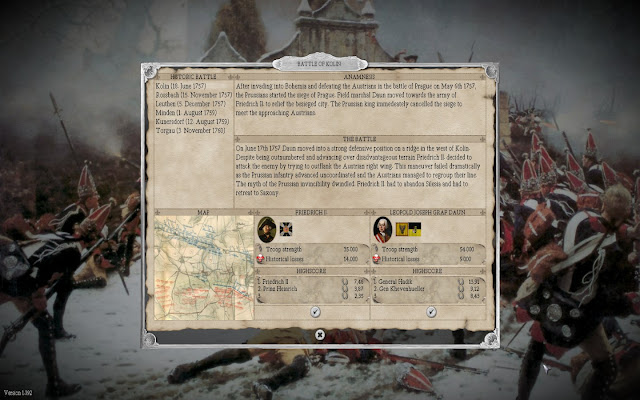 The Seven Years War is a one man show that consolidates elements from Europa Universalis, Scourge of War and the Total War series. Here is a vignette about the use of dragoons in the Battle of Kolin, which I fought as the Prussians.

So, recap: the combined action of the medium and dragoon cavalry during the assault of the leftmost town forced the enemy to break their square formation. The enemy was routed some minutes later. Those cavalry divisions are big for a reason, make sure to use each regiment according to their best capabilities.

In addition to that, cavalry units do not have staying power. I procrastinated pulling out the III Division (cavalry) from its objective and the enemy infantry assault destroyed it beyond recognition.