US Marines' Assault on Danahem: Close Combat is Here to Stay

The USMC, NATO and ANA forces joint assault on the Taliban-held village of Danahem (Afghanistan) is all over the news today. 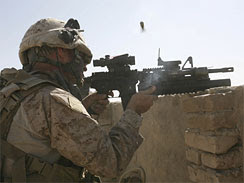 A U.S. Marine of Golf Company, 2nd Battalion, 3rd Regiment fires on Taliban positions from a rooftop in the village of Dahaneh, Aug. 12, 2009 in the Helmand Province of Afghanistan. (AP Photo/Alfred De Montesquiou)
Used without permit or monetary gain. Comment to this entry for concerns about copyright infringement.

For civilians like me, details on how the assault was conducted at the tactical level are only available from the traditionally poor media reports. 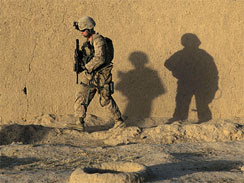 A marine with Golf Company, 2nd Battalion, 3rd Regiment of the 2nd MEF, patrols the outskirts of the village of Khwaji Jamal, Aug. 10, 2009, in the Helmand Province of Afghanistan. (AP Photo/Julie Jacobson)
Used without permit or monetary gain. Comment to this entry for concerns about copyright infringement.

But something can be sorted out from those news stories.

"Marines were met with small arms, mortar and rocket propelled grenade fire as they flew in helicopters over Taliban lines and dropped into the town." CBS/AP

"... Marines rolled into the town despite roadside bomb attacks and gunfire." CBS/AP

Our Marines pushed through and got really close with the Taliban. In a certain way this is no surprise, the small-units tactical doctrine of the USMC recognizes that there is no substitute for close combat.

From the above quotes and if one takes the media reports face value, apparently the Marines maneuvered through the Taliban without gaining fire superiority. I'm not talking here about shooting back at the Taliban who opened fire at the incoming troops but rather to the old American-style better-safe-than-sorry, all-out type of fire superiority. Do you guys remember the old saying: "Fire without maneuver is indecisive, maneuver without fire is fatal"? That saying is even on one USMC doctrinal publication for small units! Part of this apparent departure from old time SOPs can potentially be explained by the concerns to harm the civilian population. Take a look at this other snippet:

"Martin [Captain, Golf Co, 2nd Battalion, 3rd Marines] said the Marines had devised tactics to minimize civilian casualties in the densely populated area. He said troops would strictly limit the type of weapons they used and would stick to a "proportional response" when under fire." CBS/AP

If this is true I can't even imagine the effort and the increased risk faced by our troops while changing their drills and tactical stance from soldiers killing militants to SWAT cops liberating hostages. I can only commend the sacrifices they make for our nation.

And finally, the always controversial point of air support for fighting insurgents.

I find it hard to believe that these aircraft were there just as a show of force. But the fact that apparently they didn't have to drop ordinance on the town is good news.

As time passes, stories from this battle will start to come by.

On the meantime: Semper Fi!

On War #293: The Price of Bad Tactics
By William Lind, February 2009
(Discusses the relationship of poor infantry tactics and the excessive reliance on close air support)