Some 13 years ago, I started posting a tactics primer series for the Black Shark flight sim. This series relied heavily in Richard Sheffield's Gunship Academy. This book was originally intended as a sort of "strategy guide" for the wildly successful Gunship by MicroProse. 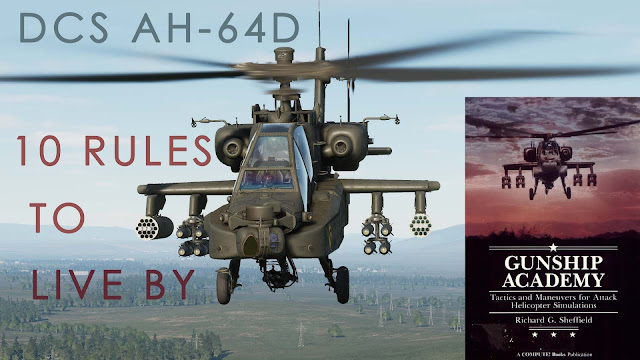 I'm starting today a redux/remix/repost of that series, now with the help of DCS's AH-64D Apache.

All forms of combat require an agile mind able to adapt to the continuously changing challenges of the battlefield. In tactical combat, there are never absolute truths or optimal solutions and speaking of "rules" sounds like out of place. The "rules" discussed here are actually guides that are valid in most situations. Take these "rules" as a framework to think about your own solutions to the tactical challenges you will face.

... Or over any area in which you know or suspect there are enemy troops. Remember, under your aircraft is one of the places where you cannot see or aim your weapons. This is a rule that almost everyone is familiar with, even fixed wing virtual aircraft pilots.