Kiev `43 is one of those Panzer Campaigns war games that shows you how the tide of war changed in the Eastern Front. Kiev `43 is just a snapshot of the massive push of the Red Army in the southwest direction, a few months after the fight in the Kursk salient. During this period, the Red Army's concept of operations have significantly matured, in particular for the conduct of the breakthrough. The concentration of artillery, the reduction of frontages for every unit, the use of tanks as support units for Rifle Divisions ... All of that is there in Kiev `43. 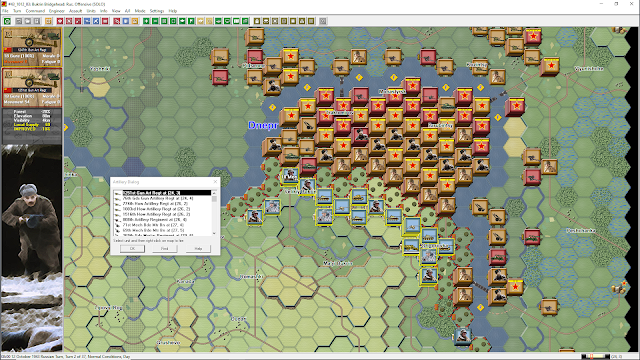 The Bukrin Bridgehead scenario depicts a Red Army offensive that ultimately failed. Some sources cite the difficult terrain, with hills that favored the defense. Other sources like the Soviet General Staff's report (translated by R.W. Harrison) mention an inadequate use of artillery and lack of coordination between the air, maneuver and support units.

When I played this scenario as the commander of the Red Armies, I was very aware of the difficulties. So I chose the weakest sector held by the German 72nd Inf.Div, on our west flank. The center is held by the 19th Pz.Div. and the 20th PzGr. Div, from which I kept distance for a while.

My breakthrough on the west flank was bloody but mildly successful. I was able to use the plentiful artillery support and some sporadic air support units to suppress and disrupt the Germans (see above screenshot). 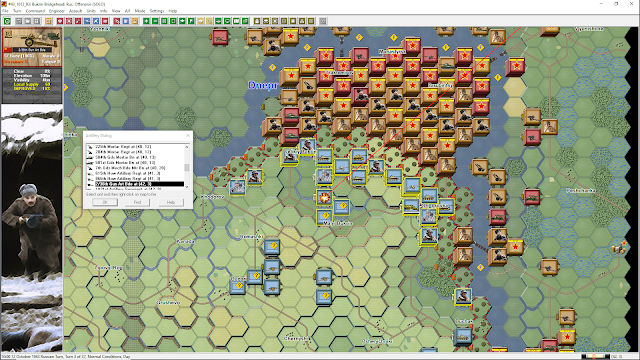 Having observed the German's surprisingly high level of indirect fire support, I sent my recon planes to observe the rear areas. Found some German artillery units which were out of reach for my tubes and had to rely on the limited air support to just harass them. See screenshot above.

By noon, my breakthrough was around 3.5 km deep and I started suffering from the lack of armor support units. I had to move my tanks in penny packets through my (already crammed) interior lines. My units in contact faltered, suppressed by enemy indirect fire coming from elsewhere. The momentum was lost. See screenshot above.

By mid afternoon I decided to commit all units of the first echelon into a bridgehead-wide attack. This was surprisingly effective but not devoid of casualties for the Red Army. 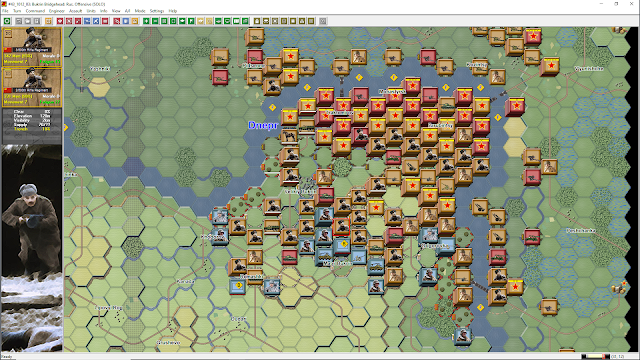 By midnight I had broke through the 19th Pz.Div. and the 20thPzGr.Div. sectors, making significant gains, but always loosing too many men. The night was not kind to my units, the disruption was enough to render a good portion of my forces combat-ineffective.

The units I could push into combat were put to good use and they managed to bag and encircle the most hard to beat units from the 19thPz.Div and the 20thPzGr.Div.

In the screenshot below, I had gained enough real estate to reach the German rear units. I was shocked to see how many howitzers the Germans had (screenshot below). Now another fight begins, the one for organizing my troops and quickly commit my second echelon troops. According to history another Pz.Div. is about to counterattack. 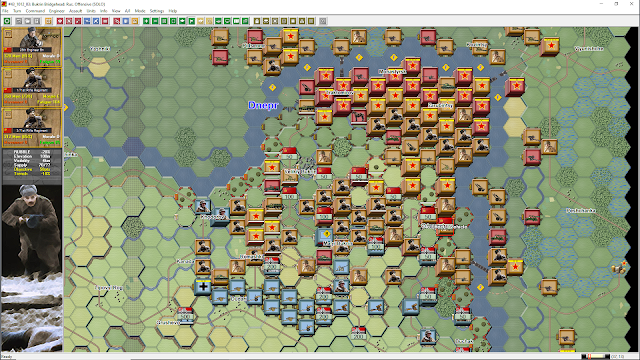 This was a very difficult operation in real life and the simulated one is giving me a good run for my money. I should have used my air assets to neutralize the German indirect fire support units first. I have the suspicion that the German howitzers killed the expansion of this virtual Bukrin bridgehead.

Interesting write-up! I haven't purchase Kiev yet, but now I feel like I should. Please post about the German counter-attack, I am eager to see if you can hold on.