The new Typhoon Rising DLC expands the already existent 1941 content on the Eastern Front. If playing as the Soviets, the starring role is for the 150th Tank Brigade, a relatively weak force consisting of T-34s, T-50s and motorized infantry. 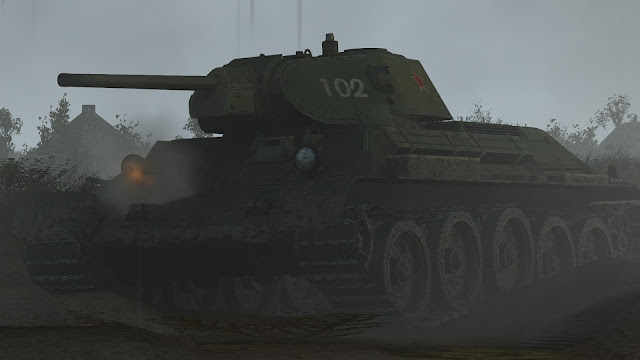 The morning of 30SEP1941 finds part of my forces fending the aggressive attempts of the German 10th Motorized Infantry Division along the Zholkevshina-Khokhlovka road. The town of Zholkevshina  first came under attack and I chose to defend it with a fortress mentality, totally inappropriate for an enemy with great mobility.

We held the village and the objective was ours at the end of the engagement. Our infantry losses amounted to almost a company. We didn't lose any tanks.
But shortly thereafter I found out that the Germans had surrounded the village because I have concentrated my forces in one spot. The forces depicted here are now encircled.
This unique wargame certainly makes you think beyond the short-lived satisfaction of holding an objective.
Cheers,
Posted by JC at 7:42 AM