It's going to be a Cold War week, it seems. Combat Mission Cold War announced, a new DLC for the venerable Armored Brigade (more on that later) and my regular diet of Steel Beasts ProPE. And on top of that I just can't let go Armored Task Force (ProSim Games). After all these years! 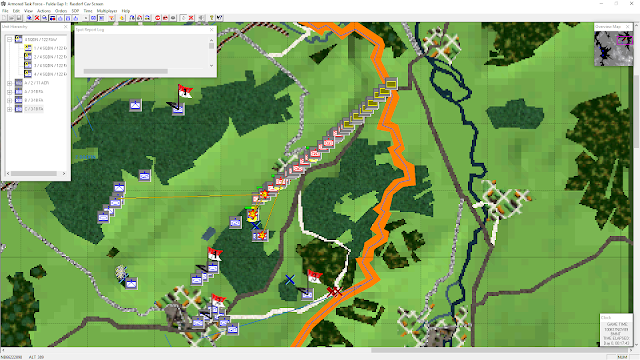 The mission is called "Guard Action at Hunsfeld" and the overall story goes like this:

You are the commander of A Troop, 2nd Squadron, 11th Armored Cavalry Regiment, screening the border between West and East Germany. The mass migration of East Germans through Czechoslovakia to Western Europe has prompted hardliners in the Soviet government to mass huge troop concentrations all along the Iron Curtain. Your squadron has been ordered to the international border in anticipation of an all-out invasion.

It is basically a US Cavalry troop (us) vs a Soviet MRB (them). All my illusions of establishing a defense in depth were pulverized when I realized that a Cavalry troop is not a lot of firepower. Hopefully, I would get some indirect fire support, but as per the OPORD the artillery tubes will shift priority to our neighbor B Troop in just a few minutes.

So, I started looking at those dismounts and concocting visions of a massive ATGM strike against the Soviets. After all, I have suffered catastrophic losses in Steel Beasts and Combat Mission due to missiles. Well, ATGM units don't have too much staying power (2-3 missiles per team) and their rate of fire measures in years for the tank crews. So I vested my battle positions with IFVs and all the Abrams tanks I could spare. Only a platoon of tanks was left in a mobile role, to cope with any enemy surprise moves. 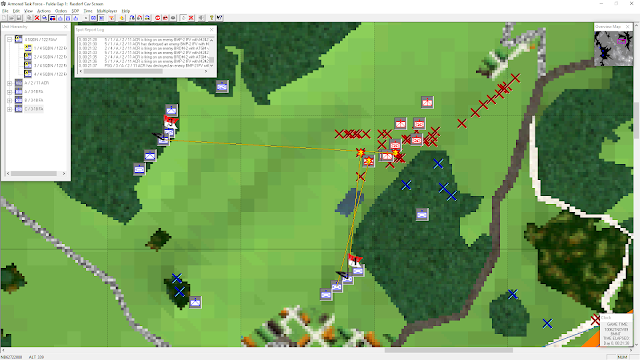 In the screenshot above the red Xs are enemy vehicles and the blue Xs our own losses. My losses were not light (keep in mind that blue Xs can be dismounted teams or vehicles), but after the screenshot above was a matter of cleaning up. No enemy unit escaped. Note the 4th Tank Platoon (ther is a flag on the commander's tank), and how it provided some additional fire power from the defile given by the wooded area north of it.

For all it has been written about the awesomeness of the garden variety ATGM, I was shocked that my AAR showed no enemy losses to my Javelin teams.

Predicting the demise of the tank as a principal weapon of land warfare is one of the longest-running pastimes in the study of military history and defense affairs.1LT Kier Elmonairy.

Surely tanks die when you use them wrongly. Ask the commander of the Soviet 171st MRD (Motorized Rifle Division).