This narrative is fictional. No political point is intended. 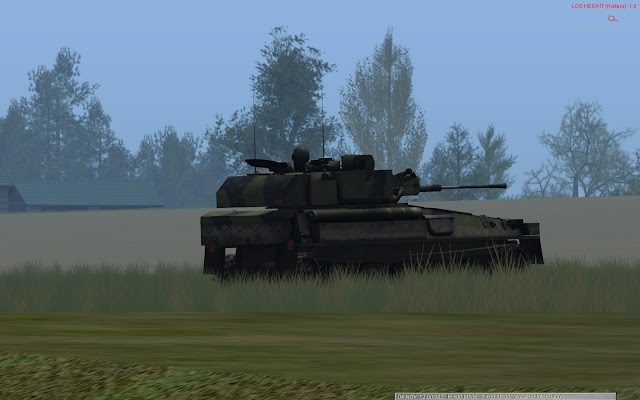 D-day. The Russian mechanized brigades have crossed the border at Morozovka and Terehova. The Russian spearheads inexplicably paused for one hour just a few kilometers after the crossing. There was no real opposition from the Latvian National Armed Forces, just a few incidents with civilians throwing harmless household projectiles at the Russians. The Russian soldiers endured this with remarkable stoicism. It was clear this was not the Russian Army of yesteryear. Professionals, very conscious of their relationship with civilians.

Sensing the lack of resistance and aware that not a second was to be spared, some Russian detachments started to detangle from the main advance guard. The Russian detachment in this blog post (3 BMP-3s) was racing through a secondary road in the vicinity of Nirza when it met a Latvian recon platoon of (FV 107) Scimitars.

The Latvian light armored vehicles were on alert about Russian armor near their position, but the distinctive sound of the BMP-3 engines caught them by surprise. With their backs to a deep creek, they  had no other option than to hide in the low terrain of the creek's bank (see screenshot above).


And two armor piercing shots from the 30mm L21 RARDEN auto-cannon were enough to kill the BMP-3. It was a miracle (the Scimitar is a recon vehicle with lots of weak spots in the fire control department) that a recon vehicle not meant to put up with moderns IFVs had such a lucky shot.

THX to you for reading it, Koen.