Some years back, I wished that NorbSoftDev would expand their portfolio to other periods of warfare. The time has come. 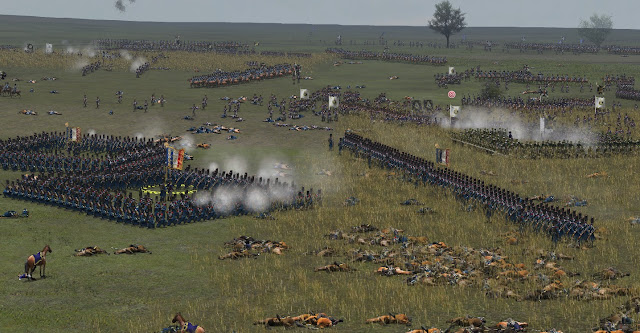 Waterloo is a battle that needs no introduction. Even my mother knew about it (does being an  ᗅᗺᗷᗅ fan counts?). So, I will spare you my non-professional attempt to review the battle and rather focus on how well you can wargame it with Scourge of War Waterloo.

Readers will notice that this review comes some 5 months late. The delay was on purpose. The original release (although in great shape already) was due a patch and it was released a couple of weeks ago. 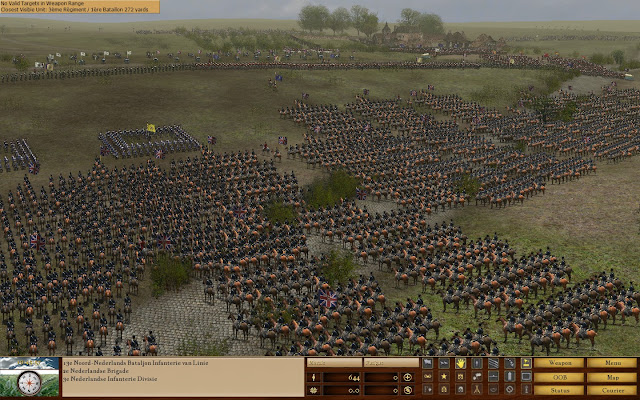 Scourge of War: Waterloo
by NorbSoftDev
Published by Slitherine/Matrix Games
Digital Download: U$ 49.99
Boxed plus Download: U$ 54.99 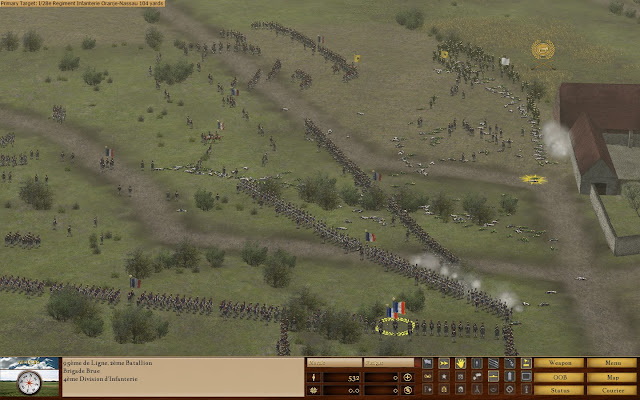 As stated in my preview, Scourge of War Waterloo (SoWW) is a tactical/grand tactical/operational 3D continuous time wargame about the Battle of Waterloo. Playable from both sides in multiplayer and single player modes.

The scope of the game engine has expanded from the purely tactical/grand-tactical towards the operational level thanks to the brand new campaign sandbox. This new campaign sandbox mode features a 90 x 90 km map in which armies and corps and detachments move and engage in battles that are fought using the regular 3D map depicting all the units involved. The sandbox campaign mode, being customizable for the type of operation and order of battle (see screenshot below) is a game on its own and adds a lot replayability. 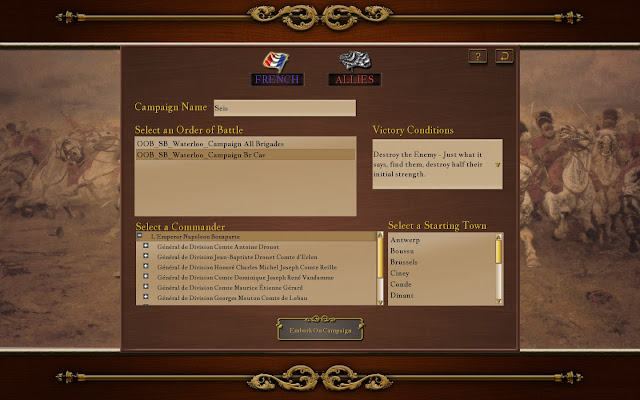 The sandbox campaign mode is realistic to a certain extent. You should not expect a Napoleonic army maneuvering simulation from this game mode. First, the area of operations is shaped entirely by roads (no movement outside the road network) and there is no apparent effect of cramming an entire army into a single road. Second, there is no apparent supply logistical constraints in this game mode. However, the rate of movement of some units make sense: a cavalry detachment moves from Charleroi to Dinant takes 2.5 hours of simulated time, which is pretty close to reality. Other units, like foot armies move too fast: I once marched an infantry corps from Dinant to Mons in 6.5 hours of simulated time. 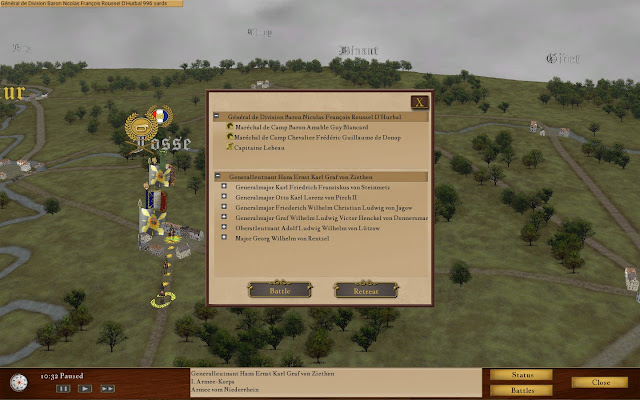 On the bright side,  the area of operations  in the sandbox campaign is relatively small (the player is not invading Russia, after all), and the time span of campaigning relatively short making food supply and movement rates kind of irrelevant. This tends to ease any other grievances you may have, like the extremely spartan campaign interface which doesn't even tell you what's the fatigue and morale status of your army is, although it is noted that those two attributes can be "recovered" at strategic towns marked with gold name tags in the campaign map. 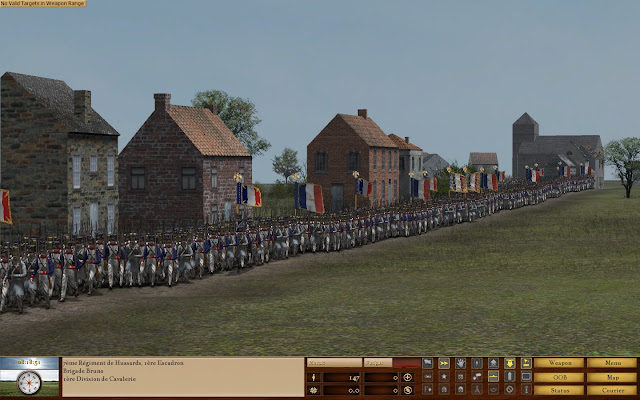 My overall evaluation of the sandbox campaign is extremely positive. I've seen entire games at the operational level that do not offer such rich wargaming options as the sandbox campaign mode in SoWW. Maneuvering an army through the countryside, finding the enemy through the use of cavalry scouts, screening your main body's maneuvering with a cavalry corps and then deploying on a gorgeous 3D battlefield, ready for your moment of glory is a wargaming feast that I have craved for a long time. 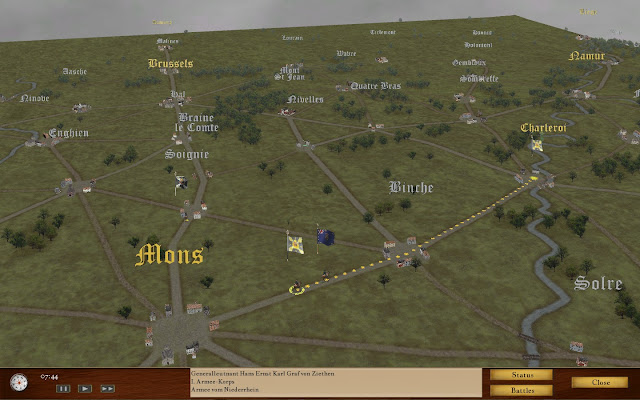 It is difficult to not be taken away by the sheer beauty of the armies during the Napoleonic times, so before I get ... erm ... taken away ... I want to say something right now.

NorbSoftDev still holds a unique vision in wargaming that dates back to the old "Take Command" series. I would summarize this vision as one that goes beyond the usual automaton-like interpretation of battle and expands towards the human-decision making dimensions of it. Sure, many other wargames had made incursions into the human factors in warfare, mainly by modelling troop's morale. But what makes a leader and the decisions that he makes from his position in battle is far more engrossing than anything else. SoWW has 20 stand alone scenarios in which the player commands brigades, corps and even armies from both sides. The unique thing about this: the battlefield is not a dry rehearsal of waypoints for non-playable units but rather a live struggle of boldness and timidity, aggressiveness and passivity, generalship and amateurism. No, NorSoftDev has not developed a self aware computer opponent. It has created a self-modifying battlefield from rather simple principles of command-modeling and general's traits. A battle in Scourge of War is pure suspension in disbelief. You are commanding, not throwing away waypoints. The sooner you realize about this, the better the player you will be. Lots of thinking, very little clicking is the key to play this game. 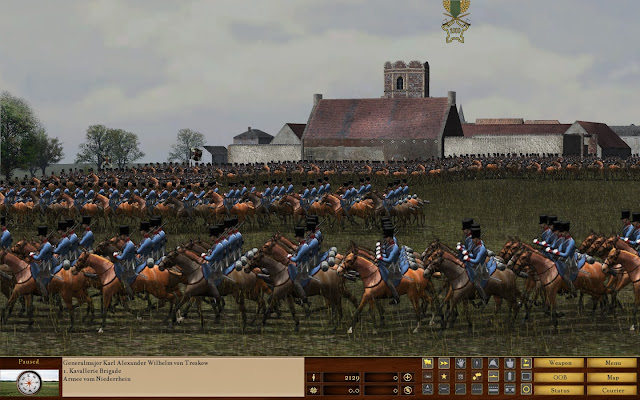 As for the representation of  the battlefield in SoWW, it is just beautiful. The enormous scale of the battle, the columns, lines and squares forming. The volley fire and the hail of balls whistling above the troops. The helpless regiments/battalions falling back in disarray. The flank attack that will save your command and takes forever to materialize. 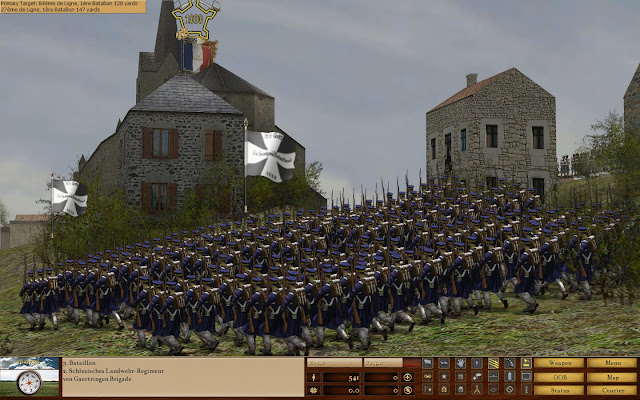 I'm going to shy away from academic debates about the correct shades of shakos and coats (there are many out there if the reader wants to be entertained). Sure enough, SoWW takes some sporadic artistic licenses and abstractions. Speaking of the latter, despite the great new patch which keeps AI units at larger distances from each other, units will show up some non-kosher moments. Units walking through each other without suffering a loss in cohesion, units walking through walls to enter a building, etc. But the impact of those moments is always minor on the tactical flow of battle. In addition to that, the player should keep in mind that the scale of the maps' objects and units is slightly scaled to improve playability. 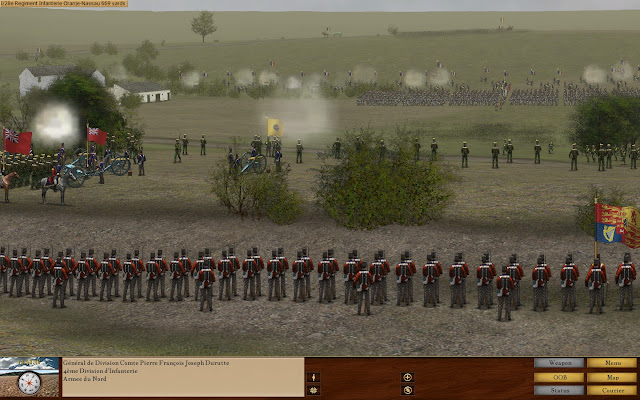 The release of development/modding tools some weeks back may help those with an inclination and will to mod almost anything in SoWW. Some mods are already available but were not tested for this review.

A(+). Outstanding. As I wrote before, NorbSoftDev has created a new genre and keeps improving its original grand vision. A true tactical/grand tactical Napoleonic wargame for grown ups with a solid foothold in the operational level of war. This is a solid contender for game of the year.

I like to play games that make me feel something. This one made me feel a commander in dire straits, sometimes wishing I was just spectating rather than fighting (being a leader demands a lot of your cognitive skills). Because the battle below those ranges and hills is an spectacle.

Sure, if you look close enough the game will show abstractions, like a simulation of a medium-sized city would do.

Will you find Private Friedrich Lindau, from the 2nd Light Battalion of the Kings' German Legion, with his pockets full of peas taken from the farmhouse at La Haie Sainte being carried away as a prisoner?

But I can tell you that I keep looking for him ... 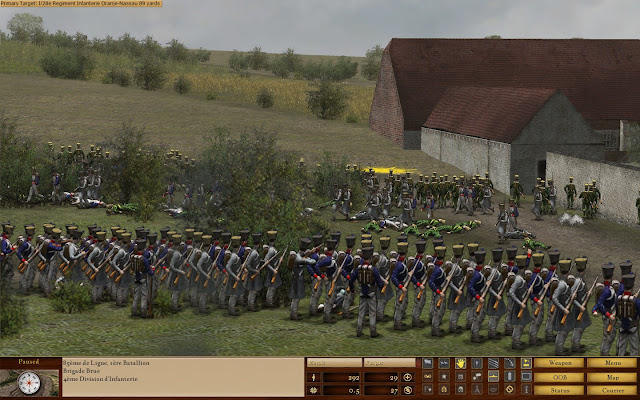 Great stuff JC. I didn't know about the patch.

Great write-up and I concur...it is a superb game. It feels so grand in scale and drama. Beautiful set-up of screenshots, wonderfully dramatic!

P.S. Curious as to what troop ratio you play with?

Thanks for your comments, gents.

I am playing with a ratio of 1. For regiments with more than 270 or so, it will just cap it at that number of sprites. I think.