In the brave new world of computer gaming, where fantasy is premium (is history not fun/epic enough?), if I read a title sounding like "Rule the Waves" and the description "design your ships in a detailed ship designer" I would have not even payed attention. It is only because I love everything in the Steam and Iron line of products from Naval Warfare Simulations, that I bought Rule the Waves and I am here to tell you about this game. 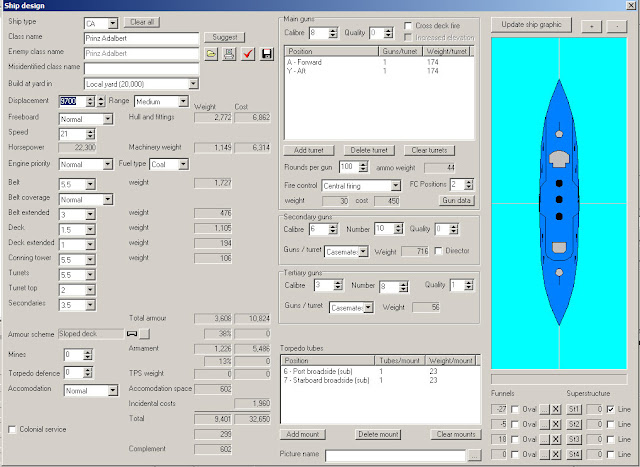 Rule the Waves (RTW from here on) is a game of global naval warfare with the player in charge of naval strategy, operations and tactical battles at the dawn of the 20th century. In its current state, RTW can be played as the major naval powers.


Research is implemented as general topics (armor, engines, armor piercing shells, ship design, etc), to which the player throws money into and gets very specific results. You don't go and pick a specific technological advance and "research it". Instead, you focus on a general topic and the results show up, or not. In one of my games, I associated with the US and my technological advance stepped up significantly. Other thing that I like is how you can license technological advances from other countries. Or just spy on them. I couldn't shake out the Italians from stealing information from my German naval design bureau.

I'm sure there is a "tech-tree" (oh man, how much I hate that phrase) inside RTW, but it doesn't show up on my face. And for that I praise the designers. No admiral in charge of a country's navy had ever to choose between researching an improved torpedo gyroscope or proper rings for heavy turrets.

The ship designer offers a 2D view of the ship. The player gets to play around with engine types, fuel types, armor, main and secondary guns. Be warned, you can't build a ship that defies the laws of physics or a ship that uses hardware that is not available yet. There is a button that validates the design and you will be getting a lot of warning messages about stuff that you threw on the ship and doesn't make any sense. Be patient. Again, remember that this is not a fantasy game but rather a game based in the challenges of ship building in the 1900's.


The world map is divided into grand regions and you can send ships to these regions by using an interface. There is no representation of the ships on the map. When you hover your cursor over the region, the amount and type of ships in it show up in a tool tip.

Keeping the seas open is the paramount mission of navies. I didn't see any type of explicit presence of merchant shipping (its tonnage, routes, etc) in my game play. From reading the manual, I see that there is some abstraction in merchant shpping, but merchant raiding, blockades and convoy attacks are possible. I played only as the Germans. Maybe if I try playing as the UK some maladies about sea trading/merchants will show up earlier in the game.

The levels of tension (the bar graphs on the right side of the screen) are a great way to keep tabs on your friends and enemies. I once vigorously protested against the blatant spying from the Italians and the tension levels with Italy went up. The war you are seeing the screen broke after I sent out a small task force into China.

The tactical battles are in a 2D map, exactly like Steam and Iron. Like in any other game linking different levels of war, the appeal of doing a good job is not only the prestige of winning a battle but also preserving your force for the duration of the war.


Rule the Waves is a naval strategy aficionado's wildest dream. The setting is exciting, the game design is very clever, and the game play is smooth as silk. The scope of this game covers naval strategy, operations and tactics. This is THE tour de force of early 20th century naval warfare.

Can you purchase it via any other means apart from "steam" (pardon the irony)?

No, these guys are ferociously independent.

I not a "steam" user, and wont become one.

Mark, I think that there is a bit of a confusion. Rule the Waves sells directly from the Naval Warfare Store. No Steam account needed.

About Steam, you got that one right, Mark.

I am a Steam user just because a couple of games I play, which are not available elsewhere.

Their pricing policies must be a killer for small game designers/companies. In addition to that, one of these days Steam will fart and we are going to be alone to figure out how to play the games we bought/rented.

SAI with the Campaign expansion is absolutely superb. I'm obsessed with WW1..but not a big fan of Naval Warfare so Rule the Waves is prob off my shopping list. Saying that for those into Naval warfare it is most likely a must own.

I want to see a Steampunk Mecha Mod:) Or want a game like this but to do with Steam Punk Mechas!