Vadim Obukhov, a Captain of the 604th Red Banner Special Purpose Center explains how his 4-men team stormed a building with an improvised top entry. 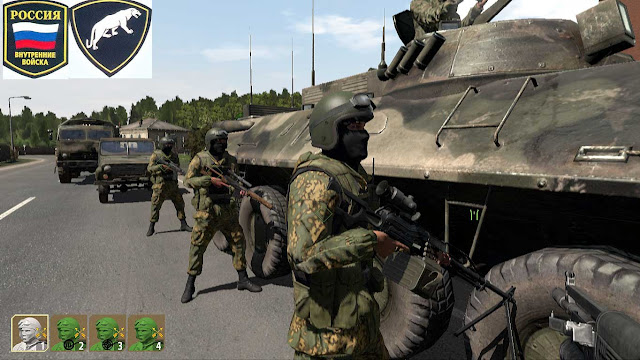 This story is from game play of an ArmA 2 Operation Arrowhead custom-made mission. This mission takes the very lacking indoors combat capabilities of ArmA 2 to the extreme. I made every man of the team playable to get them and move them inside buildings. In addition, after much effort I couldn't figure out how the hell to have a mortar to drop smoke at a specific location. So I had to fake/script smoke deployment with a trigger (an Alpha radio call).

The insurgents were either few or very elusive. A couple of previous cordon and search operations resulted in just very scared civilians. The insurgents' posture seemed very bold a few weeks before -they have set
roadblocks in a couple of locations- but at the time of this operation we could barely catch up with them. In that sense, finding them was a victory itself. Corralling them in one building, like that day a few policemen and a detachment of Army infantry did in Novopavlovsk was an amazing feat. By that time, we thought that our deployment to Mineralnye Vody was intended as a facility security issue. Everybody in my team has served in infrastructure security deployments at various units of the MVD. Finding out that we were there for more than watching the perimeter of an airbase was very exciting.

We were transported by helicopter from Mineralnye Vody to Novopavlovsk. After our arrival and a very animated discussion with the local police chief, it was agreed to entrust me the command of the inner perimeter of the building where the insurgents had barricaded. We discussed the matter in our usual Russian way: loudly, and with threats of boss-phone-calling flying back and forth. I guess we had a boss that was higher in the food chain. I don't hold any bitterness to the police chief, he and his men proved their worth holding up against serious firepower ... Same goes for the Army captain who arrived half and hour after the police shootout. The Army soldiers had deployed an outer perimeter and were on the watch to avoid any of the insurgents escaping.


We had no explosive ordnance disposal personnel at the time of the mission and the possibility of all the first floor entrances being rigged too was very likely. The presence of insurgents in the roof convinced me that it was not likely that the roof access point has been primed with explosives. So I decided to enter and clear the target building from the top.

The plan was to clear the roof of the target building with fire from our machine gunner (fire support "team") and then access the target building from the rooftop entrance and clear it (assault team, a rifleman and me). Both teams were to perform their missions from the same row of housing project.

The building was cleared within an hour and a half after our arrival to the scene. I was treated for my injuries at the spot. The ordnance disposal team arrived early in the evening and neutralized the insurgents handy work with little problem.

Looks like a pretty cool mission. Will you be posting it somewhere?

Thanks a lot for this. Can you tell me if your used any particular script to make the AI better inside building. I ve seen on BI forums and Armaholic that many have been done to make the AI better move inside building and patrol and search houses.... And yes I'd also like that sometime you could post a link so that the reader of this great blog can play some of the exciting Missions or Scenarios you develop... Cheers, Max

UPSMON runs however you want it to (It overrides player commands in-game, however) and has options to fortify positions in buildings, set up ambushes, patrol, and a bunch of other useful things for mission makers.

ASR_AI is an overhaul that scales unit efficiency in the field based on values it assigns so that SF troops are way tougher than Takiban militiamen in combat. They'll search houses and set up in them if they feel it'd be useful. They'll rearm from ammoboxes and deploy smokescreens effectively.

As for the mission, I posted a comment last night but I seem to have failed to click publish.

All in all, good thinking on how to make this work, as most players would've just relegated themselves to losing a man entering the front door or something. I'm really digging this series and I look forward to seeing the next one.

As for the smoke screen, I do think I have a mapclick barrage script somewhere. If I find it, I'll e-mail it to you.

Wrt mortars firing smoke missions: Arma2 doesn't feature any smoke rounds for the AI-crewed M252 81mm and 2B14 82mm mortars. The mortars can fire HE, WP and ILLUM.
For smoke, use the M109 or D30 howitzers.

As you play the scenarios do you just play in the leader character or do you hop into the other guys to make sure theyre positioned properly?

Thanks for your comments and pointers. Anthony, that's great stuff. I am definitively checking it out!
Sorry I can't post this stuff anywhere ... I don't like releasing stuff without some sort of minimum guidelines and playtesting.

I played this moving from character to character on the Russian side. I used that script line that James McKenzie posted a while ago. Search for "be every soldier in the squad" on this blog. LMK if you want a link to that blog post.