The mission time is a couple of days before the one featured in my previous blog entry. In this one, my flight of two Ka-50 was tasked to rendezvous with a supply column coming into our base of operations (Mineralnye Vody Airbase).

This mission is the background for some reflections about things I wish somebody would have told me back when I started learning to fly this attack helicopter.

Flying Helicopters is an Exercise in Anticipation

The pilot moves the controls, control surfaces in the aircraft change their orientation and air flows change. That's the theory. In real life there is a delay between the pilot's input and the effect in the flight's regime. Sometimes this delay is almost imperceptible, like in fast aircraft and jets. But in helicopters, this delay is more evident and often results in over-input by the beginner pilot. It goes like this: the pilot moves the control and for a fraction of a second nothing happens so the pilot thinks he is not moving the control enough and he moves it a bit more. By the time the aircraft control surfaces have changed the airflow as the result of the first pilot input, the second pilot input changes the control surfaces again. Then the pilot, a bit alarmed by the seemingly capricious movement of the aircraft, tries to revert both the first and second input with a third input which often comes out a tad out of sync and too strong. The overall result is the so-called PIT (pilot induced turbulence) and the only way to avoid it is to have a feeling of what and when the aircraft will do as the result of your input.

The byline: every time you move a control, you should have a mental picture of what the helicopter will do and when it will do it. Only after having that picture on your head you will be able to counter whatever you did wrong in the first place.

The bad news: first, it requires practice. Second, the Ka-50 has an electronic dampening system to prevent your over-inputs, which means that if you find yourself in the middle of a PIT you are handling your controls with hands and feet made of lead.
The good news: you already learnt to cope with inputs and delayed responses when you learnt to ride a bike (there is a tiny delay between your center of gravity moving out of the center line and you falling off your bike) ... And you were like 3 or 4 years old!

Best way to practice: hovering offers the best opportunity to practice your "anticipation" skills so hover, hover and then hover some more. Without the hover assist of the Ka-50, off course. :) Get into a stable hover and make mental notes of how much input is required to do so and how long those inputs take to kick in. Then get a feeling of the effects of moving the cyclic and collective from a stable position.


Do not pump or pulse-rise your collective during take off

You are a green pilot and either read my previous point or figured out yourself that when you move your controls wildly bad things happen. So you want to be careful during take off and to get into a hover you raise your collective in small increments, sometimes even bring it down trying to compensate for your latest input.

Wrong! Doing that, particularly pumping the collective during that crucial moment where your landing gear gets lighter (neither airborne nor fully standing on the ground), can lead to ground resonance or dynamic rollover (if you are sitting on a slope or if there is wind). Ground resonance is a sort of PIT, bouncing-type of thing aggravated by the suspension of the landing gear and the ground effect. The cause is easily eliminated by a slow but steady pull up of the collective up to the position where the helicopter will hover.

Don't be a hotshot

I brought the idea that pilot cockiness had a value in itself from several years of virtual flying of fast jets. It didn't take me too long, but it took too many crashes to find out I was wrong. The odds are against the combat helicopter pilot. Most aeronautical accidents happen near the ground (take offs and landings), and I spend most of my Ka-50 flight time very near to it ... You do the math.


Don't live (and die) by the trimmer

Back when the original Black Shark was released, threads about the trimmer would go for no less than 10 pages. It was the acme of true airman-ship to either fully understand or correctly use the trimmer. Colorful creatures like the "Russian" and the "American" way of trimming came into life. The problem was that many of us virtual pilots forgot to be virtual pilots and became virtual engineers. And you know how good pilots engineers are? I got trapped into trying to squeeze my flying repertoire into my trimming when in reality the opposite is what I needed.

Even today it is the subject of commentary, discussion and agony for some pilots. So here it goes: take a deep breadth and say to yourself "neither the trimmer nor the flight control system or any other shit is flying the Shark but me". Thanks. Now repeat it until you believe it.


The Ka-50 has a trim system that does basically two things. One is to hold steady the controls at the position you had them when you released the trim button (easy to understand). Second is to send a snapshot of your helicopter's position, roll, pitch, yaw, airspeed, and altitude to the flight control system (easy to understand but difficult of remember).

If the first casualty of helicopter flight simming using a home computer is relative motion awareness, real muscle and touch memory must be the second. You move your joystick and the virtual cyclic in Black Shark will move, but the sensory feedback of where both the virtual and the real things are do not match. If you move your joystick, press the trimmer button and then release everything the stick will return it to the center position. However, the virtual cyclic in Black Shark will move and stay at the position where you released the trimmer button. The result is something you can touch and feel as in the neutral position (your joystick), something that you can't perceive (the virtual cyclic out of the center position) and your virtual aircraft flying seemingly with a mind of his own. 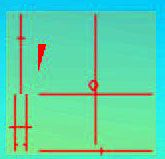 The best way to perceive where your virtual controls are is a panel that appears when you press [RightCtrl]+[Enter]. It looks like the thing to the left of the paragraph. I call it "the red panel".

Try to develop a visual memory of the position of the cyclic and the corresponding airspeed. Just from seeing that figure on the left, I can tell you that the airspeed you will get from that cyclic position is very, very low, almost near hover and that it will lead to some negative speed in the long run.

The thing that converted me into a believer of "the red panel" was the pedal controllers. I have a set of CH pedals and sometimes I inadvertently step on one of them while releasing the trimmer button. Well, not fun to get your virtual pedals locked all the way to the left. Even less fun not knowing that these virtual pedals area actually there. So, thanks ED for "the red panel"!


The byline: I wish I had a different attitude (no pun intended) when I started with the Shark. Sort of "understand what the trimmer, the flight control system and the autopilot can do for me, not what I should do to avoid an accident-hungry beast". If you are struggling with it, my friend, you don't need an "American" or "Russian" way of trimming. What you need is a [insert your name here] way of trimming.

To do list: imagine yourself flying a combat mission and the changes in altitude, heading and airspeed you will be doing. Then develop your own best way of putting the aircraft systems to work for you. What the systems do is all over in the web and other manuals, what is not actually there is how to use them effectively.

How to stop the ground from spinning around you

Those unavoidable situations where your aircraft starts to yaw, sometimes even spinning wildly ... Why? It may be for several reasons. Some of them are still unknown to me. So I will share my quick and dirty checklist for when that happens

I know that one is in the most basic helicopter flight manuals, but after struggling to get the trimmer into submission I lost my manners. The perfect landing recipe for me is to set heading straight into the landing spot  and a forward airspeed of around 50 km/h. I then regulate the glideslope with the collective and the forward airspeed with the cyclic. Again, no trimmer needed unless I've aimed my aircraft poorly.

Another extremely useful post, thanks!! It's always nice to get tips on flying, mastering the DCS sims is not easy.

Thanks for your comment. I heard of an upcoming transport helicopter from DCS today. Good stuff.

Yes, the DCS: UH-1H Huey. Looking forward to it... Too bad there's no jungle map available, so no Vietnam missions.

I wonder which type of missions could be written/played for the Huey ... In the most used setting for DCS world (modern day Russia vs Georgia), the Huey sounds so yesteryear!