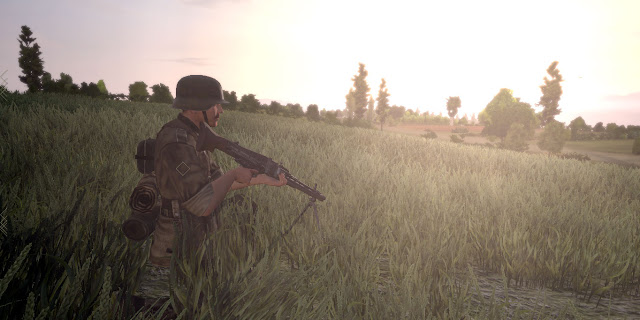 I've got flanked pretty bad today, and I shouldn't have ...

Another custom-made, single player scenario in Iron Front Liberation D-Day. This time is way more dull and  just for practice. I am commanding a German infantry squad against a platoon of US infantry that is advancing over open terrain.

The fire fight raged at a crazy pace. The cracking of rifles, Browning automatic rifles and the sporadic Tommy gun shifted to the left of our position. As for the light machine gunner, he ran out of targets soon enough ... Unfortunately, mostly to the lightning movement of the US infantry getting out of his iron sights.

A quick check at the mini-map revealed no less than 18 US infantry on our left flank.

After a short push towards the left flank, we killed the majority of the enemy forces. Not bad, but getting flanked is just too close to my adrenaline tolerance limit.

The issue of how to use a modern infantry squad effectively is like a virus I can't take out of my head. The transition of monolithic company/battalion formations in close, almost Napoleonic, formation during the Franco-Prussian and Russo-Japanese Wars towards the more open formations used during the Second Boer War and (in some cases) first stages of WWI is just a fascinating topic. All culminating in the birth of the squad as a usable tactical unit ...

There is an excellent vintage bulletin (circa 1943) about the organization and tactics of German squads during WWII written by the US Military Intelligence Service . I actually have a printed version of it, profusely  annotated by Matthew Gajkowski.

Although I recognize that warfare is a system of expedients, it is interesting to read the somewhat stiff field manuals not to follow recipes but to find general trends. In the introduction of his publication, Gajkowski writes:

In contrast to the doctrine of other nations the German army holds that the machine gun, not the rifle is the backbone of infantry tactics. The German squad is built around the light machine gun. It is the squad's base of fire. The riflemen support it and provide ammunition for it. In the US squad, the rifleman are the base of fire and the BAR supports the riflemen. This may be one of the reasons why the Germans stayed with the K-98k rifle (designed originally in 1898 and modified last in 1930). In the US squad the M1 rifle (adopted in the 1930's) was the newer weapon while their automatic weapon, the BAR (originally an 1918 design) was old. In the German squad the MG-34 (introduced in 1936) was the new design. The Germans even came out with a replacement for the MG-34 in 1942 (the MG-42).

It doesn't take long for the Iron Front player to fall in love with the long range and high rate of fire of the MG-42. Taking proper advantage of both is an entirely different matter. Page 14 of the bulletin makes a point that is repeated over and over:


Victory  comes  to  the  one  who  fires  the  largest  number  of well-aimed  shots against  his  opponent  in  the  shortest time.


Ideally, the light machine gun fire should be the sudden, devastating opening (and only) act of the firefight. This is the point where I can find some basis to explain my du jour misgivings in the virtual battlefield. I just handicapped my light machine gun's firepower with a narrow and shallow field of fire.


A narrow filed of fire was good to protect my gunner (only a few enemies could hope to engage him) but allowed the enemy to move through it fast and towards a tactically advantageous position (my left flank). A shallow field of fire meant an inability to take advantage of the enemy's deep formation and long exposed flank.

Hi JC! Very interesting post, I also have a special interest in small unit infantry tactics. Do you know if that printed book also available to be bought as a high quality downloadable PDF? Seems more convenient than getting a physical copy.

Also, have you seen this page:

Some very interesting stuff there, particulary the series of short PDF:s on infantry tactics under "Infantry Tactics for Leaders".

Excellent defense and good material, it always bother me the compromise between good sight position and enough cover for the main guns (artillery and machine gunners). If I could put a MG on the top of light post, that could be an awesome sight before been gunned down at the first rounds.

Now, I'm practicing in different games with the reverse slope defense, let the enemy comes close and tops the ground so I'll take it in the way down. It works good in front of tanks and some infantry (mostly IA), but with experienced infantry (good TvT players, rarely IA) I got smashed.


The 2/5 website! Fantastic reading there! It has been my #1 bookmark for a long while.

I don't think the booklet can be bought as a downloadable PDF and I agree is a pity.

Marco, thanks for your comment. Reverse slope defense had worked for me only when I have some eyes on the other side.

Firefights are all about trade offs. One of the biggest deals to me I pulled from Gajkowski's reprints/translations was that the Germans moved their MGs as often as possible. It's important to do as much damage as quickly as possible and shift to a new position immediately to do it all over again.

Granted that you didn't have the ideal two MGs at your disposal, you defeated a numerically superior and debatably better equipped force, that says a lot. I'm sure, had you had the second MG42 available, you would've torn their flank apart in short order.

As for the cover/fire arc debate, I'm beginning to choose cover with restricted fields of fire over the reverse. The general rule of thumb I find that works is to shift towards better cover and restrictive fields of fire when you're numerically outnumbered, if only to minimize the amount of fire that can be brought on you. Better to conserve your assets than overwhelm them with a target rich field of fire they can't manage alone.

I agree with Anthony. You did not do bad at all. Your initial MG firing position was very secure, and you did manage to cause some casualties to the enemy. What more could you ask for?

Yes, a wider firing arc would have potentially caused even more enemy casualties, but it would also have left your machine gunner more exposed to counter fire.

After you have opened fire and given away your position, you do need to move immediately or you will get killed, no matter how secure your position is. The enemy will either take you out with heavy/indirect weapons, or flank you.

It looks like you did not have a pre-planned secondary position, but were forced to fight out in the open to protect your left flank? Still, you were able to survive and win the fight, which is all that matters in the end.

Thanks for sharing this. I felt like I was right there with you on the battle field.

Thanks for your comments!

I hope that sometime I can extend the discussion to Soviet and US squads.