The underwhelming fires from field guns and howitzers didn't provide enough support to the grenadiers and panzers of the 10th and 21st PzDiv. Undeterred by the scarcity of shells finding their way into the enemy, men and machines carried into battle against an enemy whose only refuge against direct fire and close assault was in the equally scarce prepared defenses. 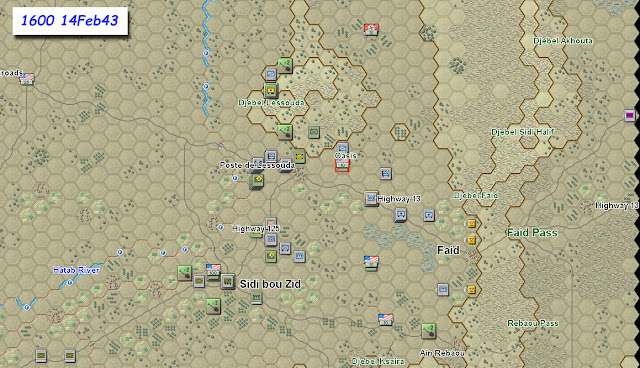 In the initial attack sector of KG Reimann (10th PzDiv.) -along Highway 13- a forward observation post manned by a handful of American troopers was brushed away without even a halt. A dozen US Sherman tanks hiding in an oasis located at the feet of the Lessouda heights were treated with equal doses of precaution and contempt. 7 Tiger tanks lobbed rounds onto the Sherman tanks from the maximum range their guns allowed. Some ten self-propelled flak guns joined the shooting a short time later. The combined fires produced no kills but enough disruption to keep the American tank crews with their heads down for a long while. It also spared them of the shameful spectacle of tanks and grenadiers rushing past their fields of fire, as if they were not worth enough a fight.  By noon, KG Reinmann was some 2 kilometers short of Poste de Lessouda and it had pushed west or bypassed anything that dared to be in its way.

The push of KG Reinman was as if a baseball pitcher had thrown a fast ball of retreating Americans towards the west, and KG Gerhardt was caught with its catcher's glove barely laced. After skirting the Lessouda heights, Gerhardt was counting on a tactical pause to assemble his troops west of the hills before an attack towards Sidi bou Zid. As retreating Americans came his way, Gerhardt found his command still spread in their tactical march route and in the odd position of not being able to neither attack nor block a relatively weak retreating force. Only the great mobility of panzers and halftracks, used simultaneously to quickly reinforce and to temporarily retreat when necessary, saved the day. By the late afternoon of 14 February, KG Gerhardt was fully assembled in force southwest of the Lessouda heights, fighting its way south against US Sherman tanks, armored and dismounted infantry.

With their mission of clearing Highway 13 accomplished and letting its sister kampfgruppe clean up the dust they threw under the Lessouda rug, KG Reinman quickly swiveled southwest in the direction of Sidi bou Zid.   A quick advance on a 3 km-wide front was cut 5 km short of the town by American combat engineers and a company of armored infantry. The spread out Germans got their noses bled when a Tiger tank and two self-propelled assault guns were blown up by Americans hiding in an orchard. The apparently ubiquitous presence of armored infantry fueled enough concern among German commanders to delay further advance into Sidi bou Zid until the bulk of the 10th Pz. Div. could assemble north of the village. Where and when the American armor will counterattack?

If one considers the 80 km tactical march of the 21st Panzer Division's KG Stenkhoff, the fact that the first German units to come close to Sidi bou Zid were from this formation has irony written all over it. Not that the arrival was in force (2 armored cars from the 580 Reconnaissance Battalion and 9 PzIVs from the 5th Panzer Regiment) or well executed (one armored car and one tank were lost). But all things considered, having some gun muzzles pointed at the main objective by the late afternoon of 14 February was auspicious in the eyes of the most optimistic German officers. Less encouraging were the news of the 800 panzer grenadiers and fifteen 105 mm howitzers that missed the party and were still slowly negotiating the slopes of Djeb el Kbar. Those trucks and the poor-quality road they were going through made the men of KG Stenkhoff to wonder if just walking would have made the march quicker. 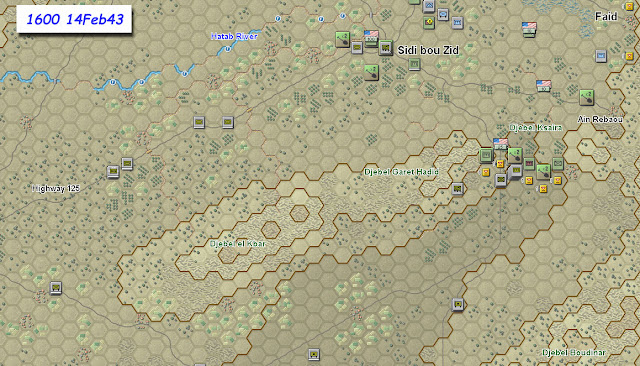 Biut if what KG Stenkhoff was missing was enough troops in contact with the enemy, KG Schuette had buckets of them at the Ksaira Pass. Four hundred panzer grenadiers, 150 combat engineers and 38 tanks (PzIIIs and PzIVs) supported by 15 artillery gun tubes spent most of the day fighting an enemy who resisted with a level of determination that contrasted all seen in the valley below. In the evening hours of 14th February, all progress was limited to a couple of American companies evicted from their positions by the direct fire of the tanks and a narrow pass through the minefield. This situation would remain unchanged for many hours.

Stay tuned ... More is coming up

3D mode please! At least one screenshot please please! Cant see what is going on :(

Hi Hudson and thanks for reading!

I will post 3D views in the second part if it helps. I'm not too fond on how that view looks, though.

Have you tried clicking on the maps? Or maybe right click and open in a new window?

Yeah hate the 2d view - its even more confusing and ugly.

I have always thought artillery is under powered in this series ?

sorry that should have read the 3D view !!!

Artillery: I once killed like 5 men in one volley (Eastern Front) from combined Divisional, Army and Front artillery tubes. :p I totally agree with you.

Artillery plays a very important part in these games. They have the highest chance to disrupt and break morale, which allows your infantry to push assaults and rout the enemy.

Artillery is the god of war, you just need to use it properly.

Also, 3D view is pretty bad. It's not "3D", it's isometric view. You can look on the product pages for these games for those screen shots. Nearly everyone uses the 2D mode, which is like most board wargames out on the market.

There are various mods like mapmod that make these games look pretty amazing.