A fine war gaming evening and a painful reminder of what Command Ops is all about. 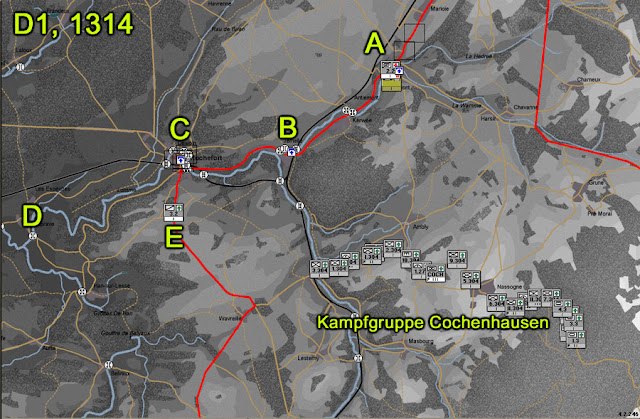 It's the early afternoon of D1 and the 2nd PzD is on a tight timetable to secure a crossing over the Meuse at or near Dinant (some 20 kilometers northwest of the sector shown in this map). The first significant water obstacle is the Lomme river. An earlier recon mission of the crossing at Hargimont (A) showed that the site is well defended by a US Army infantry battalion (unfortunately a reconnaissance company got decisively engaged there and is fighting for its life right now). The crossing at Jemelle (B) is useless because it can't be accessed from the south. The crossing at Rochefort (C) was reconnoitered by a bicycle (?!) company (E) and is also defended by US Army infantry battalion. The bicycle company was ordered to reconnoiter another crossing downstream (D) so KG Cochenhausen can bypass Rochefort (C) and continue pushing northwest. Fine and dandy, the trains appear to be on time. KG Cochenhausen will be entirely on the other side of the river in 2 to 3 short hours, I thought.

A few minutes later, I realize that the route that KG Cochenhausen will use to reach the crossing (D in the map above) passes to close to Rochefort (C in the map above). So I detach the 1st Bn, 304 PzGren. Regt. and order them to probe the defenses at Rochefort (supress or fix the enemy). I should have taken note of the time I made this decision so I can later print it, frame it and hang it in my "these are the times when you really #@cked up things" wall. 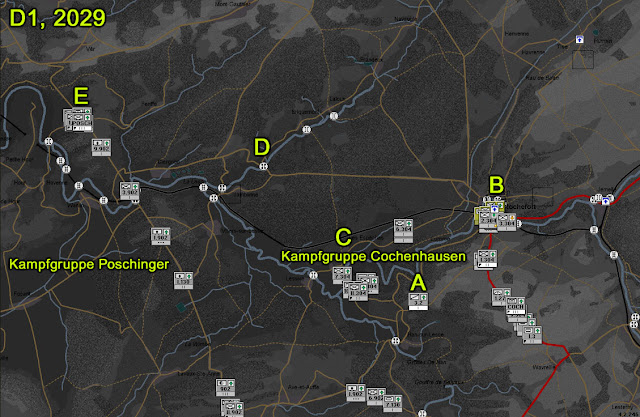 To start the fun, the reconnaissance bicycle company (A in the map above) decided to rest until further notice. Mega! If there was somebody defending the crossing (C in the map above), KG Cochenhausen will blunder helplessly piecemeal into them through hideous terrain. Fortunately it didn't happen. The attack into Rochefort (B) served its purpose, yet it progressed very slowly because the attacker/defender ratio favors the defenders. But this attack had unintended consequences: it completely derailed KG Cochenhausen's advance timetable. The kampfgruppe has to regroup/reorganize after the detachment of one of its Bn. and literally slogs towards the point of crossing (C). By 2029, just a couple of advance guard units were across the river ...

For comparison, KG Poschinger (which arrived to the AO at 1700 or so) has already crossed the river and reached a point that is merely 15 km of Dinant.

Seemingly trivial decisions delaying your forces for hours, unexpected single sided decisions from your subordinates, delays delivering orders ... Gah! I am not even in contact with the enemy's main body yet.

It reminded me of one quote that was mentioned during one of my job training sessions:


"Managers are not confronted with problems that are independent of each other; but with dynamic situations that consist of complex systems of changing problems that interact with each other.  I call such situations messes....Managers do not solve problems, they manage messes."

This unique war game has recently been updated. Well, sorta (it's a beta patch). Highly recommended and now on sale at Matrix Games.

What was it...the best laid plans and contact with the enemy and all that!!

We've all been there and done it!

If you had to choose between this game and “unity of command” or “Combat Mission - Battle for Normandy”, which one would you go for?

I’ve already got and played a lot of “War In the East” and want something with a slightly less daunting scale, (one SP campaign took me 2-3 months in that game!!). ‘Normandy’ might be too small though as it seems to focus on single skirmishes. ‘Unity may be too similar to WITE though (sort of WITE-lite?).

Too much choice! And Matrix have a sale on. No signs of a sale at battlefromnt.com though. That may sway me.

bytesanddice: yeah, but what about plans derailed without contact with the enemy. :)

Two very different choices there. :)
Both very good games. I don't know ... I would take a break from the East Front and operational warfare and get CMBN.