Writing about "flight safety" for an aircraft that is supposed to fly right into the teeth of enemy anti-aircraft guns and missiles sounds like an oxymoron. However, attack helicopter pilots are taught and practice the principles of helicopter flight safety. This short series of "Flight Safety for the Ka-50" is intended to raise some awareness on the topic. The extended DCS Black Shark manual has great information on this topic, make sure to check it out.

Ever flew the Ka-50 straight and level around 295 Km/h, right when all alarms start buzzing, seconds before your blades disintegrate and you plummet into the ground? I have to confess that in all my ignorance I thought that this blade clipping was just the strength of the forward airspeed bending the blades downward, sometimes forcing the top blades into the bottom ones (doh! the top and bottom blades can't collide with each other!) 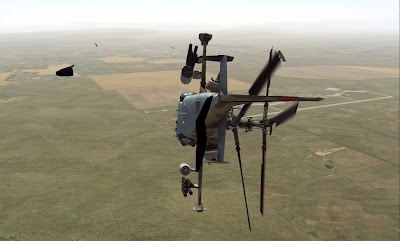 Doh! Rotor blades clipped at high forward airspeed. Image is clickeable.
What actually happens is that a stall of the rotor blades makes the blades flutter and fail structurally.

I'm no airfoil guru, so I will make this very simple. Imagine the simplest helicopter, with just two blades in its main rotor. The airspeed at each blade is what generates lift. When the helicopter is moving at a considerable forward airspeed, an interesting thing happens: at every turn of the main rotor there is a point where the instant airspeed at the blade moving forward is bigger than the one at the blade moving backwards (retreating blade). 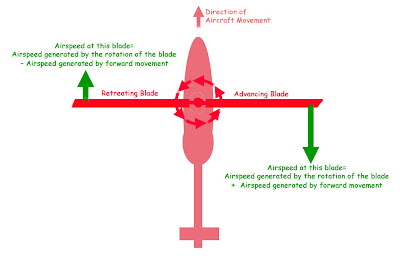 However, keep in mind that in the case of the Ka-50 the vibration generated by a retreating blade stall will eventually cause the blades to fail structurally. This has catastrophic consequences most of the times.

Dissymmetry of lift, de la Cierva and how this sim got me officially freaked out
Now, if you remember that in helicopters the airspeed at the blades is what generates lift you will realize that if the forward airspeed of the aircraft goes up, the advancing blade will generate more lift than the retreating blade. The result is that right half of the rotor disk will generate more lift than the left side. This is called dissymmetry of lift. The guy who solved this dissymetry of lift problem was the Spanish engineer and aviation pioneer Juan de la Cierva. De la Cierva invented the so-called flapping hinge, a device that allows the advancing blade to flap up (see third figure in this page).

This flap up of the advancing blade at high speeds is modelled in DCS Black Shark. See the screenshots below. Flying at 60 Km/h IAS. The advancing blade in the bottom blade assembly has almost no "flap up". Click the image to enlarge. 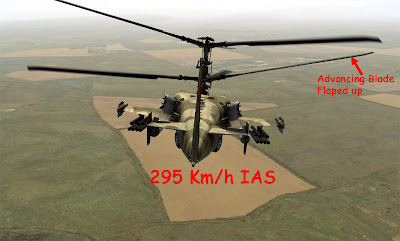 Flying at 295 Km/h IAS. The advancing blade in the bottom blade assembly has an evident "flap up". Click the image to enlarge.
The level of detail in this simulation is un-freaking-believable!

Actually, your original guess was the correct one. It is indeed the top and lower blades that crash into each other.

You described the reason for this yourself; the problem is that the advancing side is on opposite sides for the two rotors, causing them to get closer and closer as speed increases. At some point they will crash into each other causing an immediate disintegration of the rotors.

Thanks for your comment and for dropping by this blog! Much appreciated. :)

Your observation is surprising. The bottom and top blades look like arranged out of phase from each other. Also, wouldn't the flapping hinge of the advancing blade have a limit to avoid such a collision?

Hi again Loke,
You are right, the blades CAN collide with each other. I updated the entry with some info, please take a look.
Thanks!

Agree with how awesome this sim is. I seemed to only find out about it a few months ago, but i am still amazed whenever I move the control stick around and notice the bl@des realistically rotating and changing pitch...like a real helicopter... the first time this bl@de collision happened to me, i was completely bewildered for a minute [i don't see no stinking miss!les?] then realized what happened as i saw pieces of my bl@des falling to earth...along with me-fumbling for the ejection seat! Awesome sim.

Ey mobias,
Thanks for your comment.
This simulator is out of this world. Do you fly online?

no Sir- haven't begun that dedication yet- sounds fun though. I need a few more go's in the beast before I can contribute I think. Still haven't mastered the cockpit/know how to program/mess with ABRIS/NAV stuff....sigh. Too busy in real world. Found your blog here though and will have to add it to my list- good stuff here for us mil pc gamers!

I hear you, my friend.
Online flying is a great experience and people are really helpful. In addition, you learn faster when you hear it from a human being.
Real life has interrupted my whole flying experience too! :)
Maybe in the fall ...
Cheers,