This tactical vignette is about the use of the light armored vehicles, specifically the ASLAV-25 featured in Steel Beasts ProPE.

Given the high tempo of modern armored/mechanized operations, rear area security is always challenging and a major concern of operation planners. In this user-made Steel Beasts mission, I wanted to see how well a couple of ASLAV-25 platoons would cope with bypassed mechanized units threatening the rear area of an advancing NATO column.

Two reconnaissance platoons (4 ASLAV-25s each) of Company A were tasked to destroy the enemy vehicles in order to allow the flow of supplies along MSR Key. On order, the two platoons are to secure the area where enemy forces are located until more forces are assembled to screen MSR Key.

I introduced the ASLAV-25 in a previous blog entry. Essentially a reconnaissance vehicle, the ASLAV-25's agility and speed will take you out of bad places very fast. Unfortunately if driven by the tactically impaired like me, the vehicle will get into a hot zone as equally as fast. Compared to an infantry fighting vehicle, the ASLAV-25 is under-armored and under-gunned. The main 25 mm autocannon can fire both sabot and HEAT rounds up to a range of ~2,500 m. It should be noted though that the tracers for the 25 mm cannon rounds appear to almost burn out after ~1,800 m and checking where your rounds are hitting beyond that range is very challenging. The ASLAV-25 has also a ballistic computer and a powerful thermal imaging system.

The ASLAV-25, looking good before the mission. Expand the image by clicking it.
In a nutshell, the LAV reconnaissance line of vehicles is designed more for mobility and stealthy observation of the enemy rather than fighting. This doesn't mean that LAV can't be used to fight. For more details, I recommend the wonderful short book whose cover is shown below. 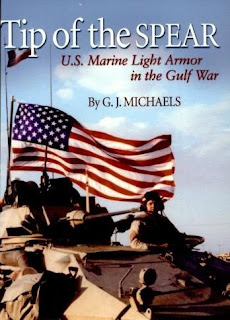 This is one of the best books out there about the use of LAVs in reconnaissance and security missions.
Coming back to the mission, here is the view from the ambushed supply vehicles in MSR Key towards the hilly-wooded terrain south where the enemy BMP-2s are located.

Looking south from the main supply route "Key". The enemy is in the hilly-wooded terrain in the background. Expand the image by clicking it.
The enemy is protected by 3,000 m of distance and out of reach for the ASLAV-25's autocannons. Any ASLAV-25s putting their tires through MSR Key or the terrain south of it would be in open terrain and defenseless against the long range AT-5 missiles fired from the BMP-2s.

To close with the enemy within the range of our weapons, the two platoons will approach by separate and covered routes. 3nd Platoon will approach from the west of the enemy position and occupy a support by fire position (SBF 1 in the map, a saddle that hopefully offers both good cover and observation) in order to suppress/harass the BMP-2s and allow 2nd Platoon's approach for a close-range kill from the east. 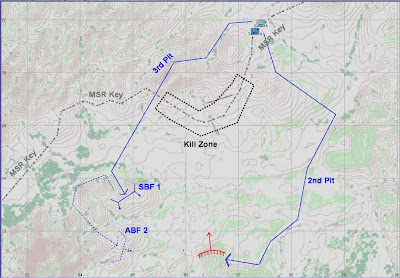 Plan of attack. MSR Key is the dotted line winding northeast. The box labelled "Kill Zone" is the region where most of the enemy fire landed so far. The suspected position of the enemy is labelled with a red ambush tactical symbol. See text for more details. Expand the image by clicking it.
If anything goes wrong with 2nd Platoon's approach, 3rd Platoon will move to an alternate attack by fire position (ABF 2 in the map) in a last attempt to destroy the enemy.