In my preview of the upcoming war game Desert War 1940-1942, I introduced you to its basic design and interface. The scenario itself is quite enjoyable and I felt like it deserved some closure. This blog post is the AAR of the battle from where I left it at the video. 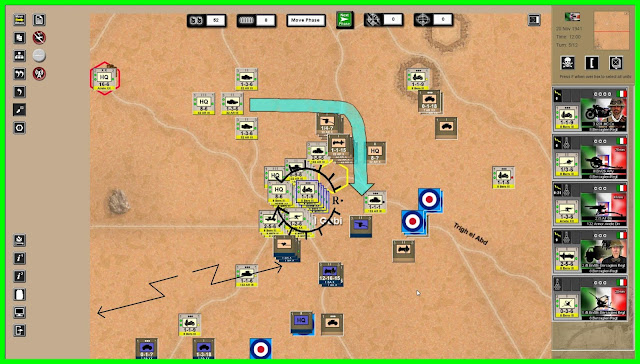 The enemy British division (computer opponent, brown counters) is apparently attacking from the south and the northeast. My battle plan for the rest of the scenario is sketched in the image above. Please note that the maneuver/tactical mission graphics are not included in the game.

The center of the map is Bir el Gubi, which off course needs to be defended/retained. Southwest of Bir el Gubi, a couple of recce and armored units are to try a screen mission or just to warn us against any enemy attempt of double envelopment. The 32 Armored Regiment, despite its limited combat power, is to assume an offensive posture to disrupt the ENY's northwest axis of attack.

So, you have seen the video, I assume :)
You have read how entertaining and engaging the game is.

Are you ready for its release of 22Mar18?

My problem with the game was the massive stacks, hard to figure out what is going on

I like the implemented limited command iteration. I'm just wondering if this would work on large scale like FITE2 in TOAOW 4.
Also the AI seems goid but again it is the small scale combat (and darn short).
BTW. I'm playing this massive FITE2 against myself and boy it is fun :)
Chris Ad

Hi HMS and thanks for reading. I agree. This scenario is particular regarding stacking. Other scenarios fare better because the lower troop/units density. For stack browsing, there is a hotkey ("C") and that will help to ease some of the pain.

Anon, given the scale of the units and the theater, the command aspect is easy to address by the player. I admire your dedication to play FITE2. That thing is huge!

This is the same scenario covered in Avalon Hill’s old PC game “Operation Crusader”, and it looks like it plays out very similarly. That’s also a WEGO system and I highly recommend it (easy to find the game on abandonware sites - the Mac version is the best and runs great under Basilisk).

Those Avalon Hill/Atomic games were wonderful, in particular Operation Crusader and Stalingrad. I think I'll get this game.