Insurgency in the North Caucasian Federal District - War Stories From the Front Lines: #7 Use of Cluster Munitions at an Insurgent-Held Pigging Facility

Captain Vasily Kashlev, 118th Independent Helicopter Squadron (Russian Air Force) flew this mission a few days after evading capture near Piatygorsk. This mission was worryingly near the Mineralnye Vody base of operations. In a stormy morning, some 20 Km north of the airbase, a pipeline inspection gauge launch/recovery (pigging) facility was seized by a team of insurgents. 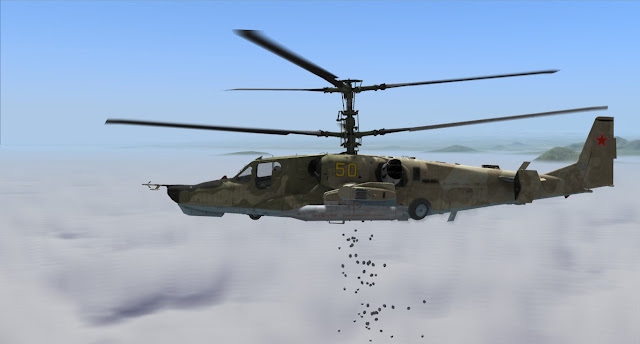 This was played as a custom-made single player mission in Black Shark 2 (DCS World).

The news caught me in the hangar. The insurgents struck again, this time so close from us and so afar from their usual turf. An Army colonel briefed us on the situation: an insurgent team has seized a pigging facility located "somewhere north of Mineralnye Vody".

The whole thing was not as much surprising as it was embarrassing. First, the news about the insurgents running amok in this place came from the oil company who was contracted for the maintenance of the now in disuse Baku-Novorossiisk pipeline. Second, our maps showed no such facility. We had some idea from the locals that the pigging station was a few hundred yards east of route P262, near a popular youth hangout, but that was it. Third, with the arrival of the Su-25s to the airbase, my two Ka-50s have been stripped of missiles and rocket launchers. While we waited for our ammunition to arrive, all we had was those hideous and unreliable KMGU cluster munition dispensers.

When it rains, it pours.

Literally. Since the past evening the weather was atrocious. Low hanging clouds, continuous rain and winds of up to 50 km/h.

Under our new tactical guidelines, we were to counter any insurgent operation at once, with the maximum force available. The Air Force was on point for this as the quickest reaction force. The low cloud ceiling left any fast mover or fixed wing CAS aircraft out of the equation.

I really like how you use several different games to progress your Insurgency War Story. Happy New Year JC.

"Persons taking no active part in the hostilities ... shall in all circumstances be treated humanely." Those are the opening words of the Convention Relative to the Protection of Civilian Persons in Time of War, signed at Geneva, 12 August 1949.
Although cluster bombs are not explicitly forbidden by the Geneva Law, the rules of war
prohibit the use of inherently indiscriminate weapons or weapons that are incapable of
being used in a manner that complies with the obligation to distinguish between civilians and combatants. Those who use them in civilian areas therefore open themselves to charges of war crimes.

Jayson, it is great that you've taken the time to copy and paste part of Geneva convention to a blog that is about video games. How about next time you feel the urge to be a better human being than the rest of us you pay attention to some real world issues or just try to slide your head an inch deeper into your bum that is clearly very very sore.

Happy New Year RangerX3X, hope this year is better than last for everybody!

Jayson: I don't understand what's the intent of your post.

I just found your site and I must say I'm enjoying it a lot.

Hi Fabrizio and thanks for reading!

Enjoy reading your stuff JC. Though I'm often gone, I always come back! :)
I wonder if that Jason guy practices Geneva convention ROE when he plays his war games? wow. Trolling at its finest!

Thanks, Matthew. Good to see you around.

I think Jayson is trying to ask the question if an area weapon could be used in a case like this.

I argue that yes, but I don't want to digress.