Insurgency in the North Caucasian Federal District - War Stories From the Front Lines: # 3 Bombing an Insurgent Roadblock at Novopavlovsk 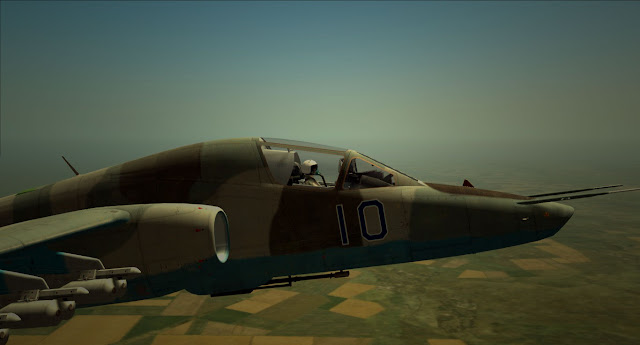 Our mission was to strike an insurgent roadblock over the Kura River, west of Novopavlovsk. We were explicitly instructed to avoid collateral damage on the civilian population and infrastructure, in particular the bridge over the Kura River. That day, a morning attack mission performed by attack helicopters didn't go so well and resulted in one attack helicopter crash landing after sustaining damage by portable, IR-guided Stinger missiles.

I was in command of a flight of two SU-25Ts, my wingman being one leytenánt that recently transferred to our unit and was relatively new to the airframe. Given the low risk of the mission, I hoped to perform some on-the-job training with the junior officer. Unfortunately his navigation system was not properly calibrated (we found out that early during the mission, his first steering points were off by no less than 3 kilometers). Although our SOPs rely heavily in visual identification/cues for targets and awareness of flight lead position and intentions, I didn't want to risk having my wingman flying over a hot area with non-properly aligned steerpoints. I ordered him to RTB before fencing into the objective area.

At this early stage of the operation, our airbase was still procuring ordnance, so we had to settle for free fall bombs of the FAB-100 type, which produce very little damage but would suffice for destroying soft targets around the objective area. Our targeting system was the Shkval, a TV electro optical system that can use a laser for computing distance to targets and data for the automatic release of free-fall ordnance.

During the second pass my intention was to neutralize infantry, which according to our briefing was on the other (west) side of the bridge. However, I couldn't acquire any infantry targets with the Shkval. This is probably due to my high altitude.

The use of free-fall ordnance from relatively high altitude is always hampered by dispersal. In this case, the dispersal was manageable due to the peculiar position of the insurgents (i.e. not close to, or easily detachable from civilian assets). Sooner than later our missions will require the destruction of insurgent positions more intermingled with populated areas or with critical infrastructure. This will require the use of guided, precision ordnance.

Another great post!! I was wondering how you find flying the Su-25 compared to the other DCS aircraft. Since it does not have a clickable cockpit, don't you have to memorise hundreds of keyboard commands, or have a printed list of commands to refer to constantly? I was never a huge fan of advanced flight simulators until the ones with clickable cockpits came around. It's so much easier (and much more realistic and fun) to learn the layout of the cockpit controls, rather than a long list of keyboard commands.

How do you get this ? Bit confused with the DCS world thing. The SU25 has got to be one of the coolest looking aircraft there is.

DCS World is free to play with a Su-25T aircaft (Fligh model from FC2) to fly it as singleplayer or online.

Su-25 is not modelled to DCS standards, i.e. you can start your engines with one key stroke and so on. It does feature advanced flight model but I'm not sure if that is up to par with DCS planes either.

DCS World 1.2.2 is out now for all the modules and Flaming Cliffs 3 is out for pre-order beta!

Thanks kylania for the heads up! :)

Hi Johan. The SU-25T is one step ahead of the FC aircraft in terms of flight model but far too short from the DCS ones. Weapons characteristics and effects should not be too far off, I suppose. But it is mainly sitting in the cockpit, acquiring targets and using sound tactics. The flight characteristics of the SU-25 will give you some realistic challenges while landing and maneuvering around, though...