The Georgian ground forces can't bear the pressure from the Abkhazian irregulars at the Kodori Gorge. The Georgian withdrawal is due east and has come to an unexpected obstacle. 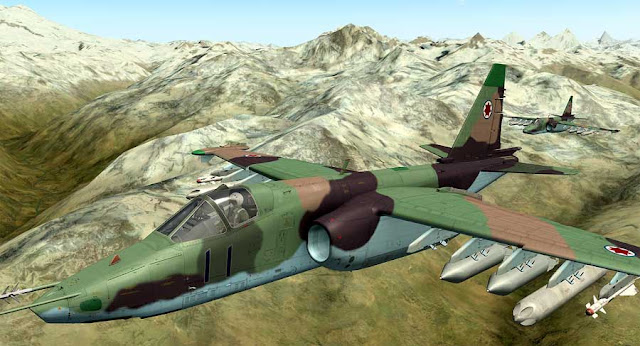 After the start of the hostilities between Georgia and the separatist provinces of South Ossetia and Abkhazia two days ago, a Russian company-sized team of peacekeepers has quickly moved into the western extreme of the Kodori Gorge. The lead elements of the Georgian ground forces held no less than three meetings with the Russian team but couldn't reach an agreement for a safe withdrawal. Two hours ago, the sporadic exchange of fire escalated further and it is clear that the Russians have no intention of letting the Georgian forces out of the gorge. Two Su-25s from the Georgian Air Force are to attack the Russian positions.

The Georgian pilots will have to deal with this mission with almost obsolete Su-25s, armed with unguided rockets and cluster bombs. According to the Georgian ground forces, the Russians have a Tunguska anti-air defense system near the bridge.