In total awe with the A-10C and its capabilities ... Really, how well all its sensors and avionics work for its primary mission. 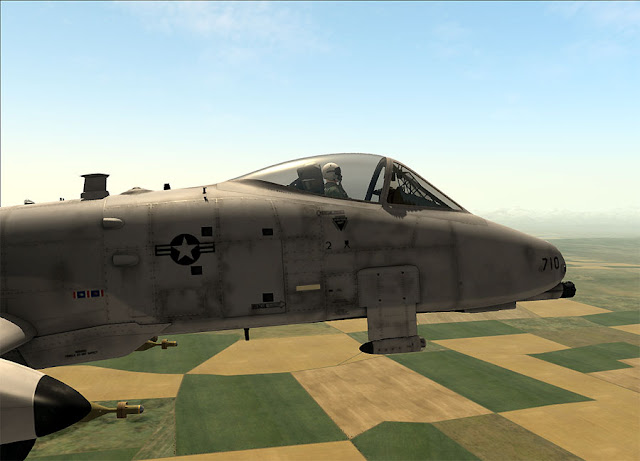 
For the mud-moving pilot, taking off towards a series of pre-planned waypoints (including a IP and target area) is complex enough. An additional layer of complexity is when that pilot doesn't know where he will drop his payload. In the case of the A-10C, a tactical air control party will frequently provide the target's location and the aircraft has a truck load of avionics and target acquisition systems to make sure that ordnance is delivered within feet of where it was intended.

What about when the pilot is granted a "kill box", where he can target any enemy forces within it? In this case, the pilot better know how to use his target acquisition systems, because there will be no waypoints, coordinates or laser designators to guide him towards the important stuff.

In addition, a view of the battlefield from thousands of feet above the ground is not to be wasted and the A-10 can be tasked as an airborne forward air controller. As the saying goes, there is always more targets than bombs, so the airborne forward air controller needs not only a solid performance on his instruments but also  the coup d'oeil of an infantry man to be completely successful. Knowing what piece of terrain is tactically important is as an important skill as proficiency with all the gadgetry.

Pilots that can't master the A-10C's target acquisition system need not to apply.

The targeting pod is the premiere target acquisition system of the A-10C. The good news? It's extremely powerful. The bad news? It's field of view is extremely narrow. It is virtually impossible to completely sweep a battle space just by moving the targeting pod around. Correction, you can do it. It will just take a long time and it will leave you extremely disoriented.

I got myself into the DCS A-10C's mission editor and put a couple of insurgent teams, each of them on separate bridges, miles away from each other. I also put myself on an A-10C with a targeting pod, some 75 miles away from the action. I wanted to practice pointing the targeting pod towards specific places of my choice. No coordinates, no TAC party to guide me to the target. Just a general idea that the insurgents are crossing the bridges towards the town of Narktala.

Do you know if there are any player-made scens/missions floating around that depict a typical WW3-CentFront sortie? You know, truckloads of tanks & APCs running in, and having to dodge fighters, SAMs & high-end AAA both on the way in and out.

try the fulda gap multi player senario, might be what your looking for.

About having trouble seeing and using the CDU, have you tried the Snap views (under "View Cockpit" in the controls)? With these you can zoom in on those panels, both on the left and right rear sides, that are hard to see when looking around in the cockpit. I recently started using them, and they are amazingly useful.

Where can I find that scenario?

Thanks a bunch for sharing this with all people you actually recognize what you are talking about! Bookmarked. Kindly also discuss with my website.
moving pods