"The Defense of Jisr Al Doreaa", A New Classic in COIN 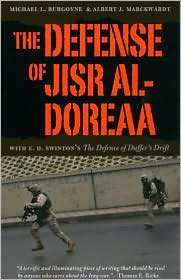 Have you guys read "The Defense of Duffer's Drift", the classic book on small unit tactics written by the British soldier and military thinker Major General Sir Earnest D. Swinton? "The Defense of Duffer's Drift" is centered on the defense of a river crossing by a young officer in charge of a platoon of British light infantry during the Boer War. This officer has a series of dreams, each one starting at the planning of the defense, going through the unsuccessful attempts to defend the drift and ending in a series of lessons learned that he applies in the next dream. In the final dream, the young officer finally succeeds. There were at least one other book with the same format of "plan-execute-improve" cycle of dreams: "The Defense of Hill 781", by Robert McDonough (if you are playing Steel Beasts, this one is a must).

"The Defense of Jisr Al Doreaa" is written in the same format, but the defense is now of a combat outpost in modern Iraq. The young officer belongs to the US Army and goes through six dreams in which he and his troops fight insurgents in the small town of Jisr Al Doreaa. The officer faces challenges that will push him to polish his knowledge of tactics he learnt for conventional wars (security, sector defense, correct assesment of fields of fire, etc) and learn new the new tactics required for fighting an insurgency (patrols, counter-ambushes, counter-sniper tactics, how to move through the "human terrain", etc).

Learning tactics from after action reports or other type of combat narrative is always easier and more enjoyable when there is an explanation of why and how the tactical decisions were made. That is exactly what makes "The Defense of Jisr Al Doreaa" such a wonderful book.

The book is short enough to be read in one sitting and is formatted in a way that would fit in a slightly oversized pocket. Perfect for reading during that last leg of the airlift and sized to fit into any pocket of the combat fatigues. Don't get fooled by the lenght or size of this book: it packs a lot of knowledge.

As a bonus, a copy of "The Defense of Duffer's Drift" is included at the end.