Command Ops 2: Knock On All Doors

Released a few days ago, this Command Ops 2 scenario pack is interesting, challenging and fun. 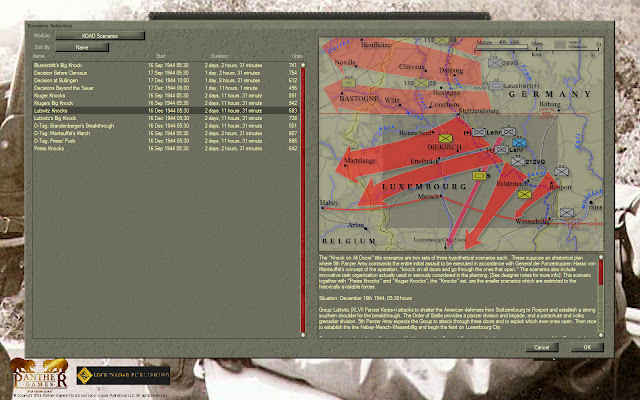 From the product description:


There are four sets of three scenarios. The first is the historical O-Tag or Day 1 set that commence on 16 December. The second or “Decision” set allows the player the opportunity to explore the famous “what ifs” faced by the German commanders on the second day of the battle 17 December. The third or “Knock” set works on the basis of employing the original staff plan, developed by General Manteuffel that embodied the concept of “knock on all doors and pour through the ones that open”. The fourth “Big Knock” series takes this concept a little further and employs an augmented order of battle.

Once I saw it available at the Lock `N Load's webpage I thought that it would be a rehearsal of the good old Battles from the Bulge (published by Matrix back in the day). But I was wrong.

The Command Ops 2 engine can simulate larger battles and this scenario pack has taken advantage of that to offer an interest view of the Battle of the Bulge. Scenarios are short (just a few days) but the area of operations are larger (I counted a 50 x 30 in one of the scenarios) and the OOBs are Corps-sized.

If you are playing this game from the German side, get ready for operational warfare at the graduate level, folks. Plan carefully your routes of advance because time is short and you will need every truck, horse, tank, gun and landser at the final objective.


I have my eyes on an scenario in which PzGrp Peiper has reached Bullingen and it is left to the player to decide which way to take. Hopefully I can play it this week!

I've always preferred the long duration, small unit count scenarios in CO and CO2 otherwise to me it just becomes a chaotic looking mess of units and I feel you lose the finesse of the engine.

The first 48 hours of the offensive was decisive. The Germans knew it would be. Additionally the limited time and size of the forces helps to recreate the historical sense of crisis and uncertainty. This is difficult to achieve when players have 20-20 hindsight and there is plenty of time and the number of units are "manageable".

Perhaps these scenarios can be thought of as a challenge in the spirit of George C. Marshall's observation in his WW I memoir.

"Daily in the Muese-Argonne, officers were assigned to command of regiments, brigades, divisions, or other important positions to replace casualties, some of which were not due to the enemy. Frequently, they took over their duties in a situation which might be characterized as a bad mess; their officers and troops were scattered about on the terrain, under the fire of the enemy; deficiencies and special difficulties had to be ascertained. yet there was rarely time for a pause in which to size up officers and the troops, check over the supplies and material, and make a calm survey of the situation. Action was demanded and often within the first hour... A renewed attack was usually required the following morning. It should be obvious that the successful handling of such situations required a very special type of man...."