The M3 GMC "Tank Destroyers" played a significant role in the Battle of El Guettar. Armed with a gun designed back in the late 1800's, it took a lot of brave souls to cope against the tanks of the 10th Panzer Division. 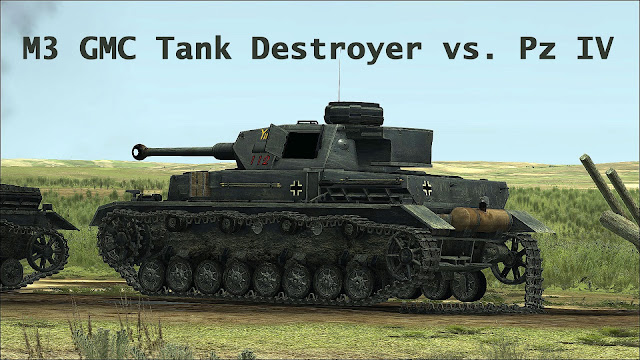 I decided to make a little scenario to kick the tires on these M3 GMCs. Despite their awful mobility, limited gun traverse and thin armor, my M3 GMCs managed to bag every single panzer. My boys may have been lucky ... But what a show!


I was quite surprised at these results. I had no intentions to use any finesse in my move to contact (I just wanted to score a couple of hits against the German tanks) and a lot of luck may have played a role.

Anyway, most of the tanks were destroyed because they took damage to the engine, which in turn caught fire. In one case, a partially penetrating round took out 3 crew members.

So many things to consider now that I am to start playing the El Guettar campaign. The mobility of the so-called tank destroyers was exasperatingly low. The gun traverse is slow, but the rate of fire was very impressive. We will have to see this things in action.

So, it looked like on the last tank, the round hit the storage box on the rear of the turret and (I am guessing here, I have not played the game) ricocheted down into the top of the engine compartment

Thanks for the video and demonstration. It appears to be a small scale version of the following real life encounter:

"Their most important engagement pitted the M3s of the 601st Tank Destroyer Battalion against the entire 10th Panzer Division in the battle of El Guettar in Tunisia early in the morning on March 23, 1943.

Deployed in defense of the 1st Infantry Division just behind the crest of Keddab ridge, the 601’st 31 gun-laden halftracks moved forward and potted off shots at the panzers as they rolled down Highway 15, then scooted back and found new firing positions. They were bolstered only by divisional artillery and a minefield prepared by their engineers.

Two companies from the 899th Tank Destroyer Battalion reinforced them at the last minute, one of them suffering heavy losses while approaching.

The panzers advanced within 100 meters of the 601st’s position before finally withdrawing, leaving 38 wrecked tanks behind. However, the 601st had lost 21 of its M3s and the 899th lost seven of its new M10 vehicles.

In fact, the battle of El Guettar marked the only occasion in which U.S. tank-destroyers were used in the manner intended — deployed as an entire battalion to stop a German armored breakthrough concentrated on a narrow front."

Thank you guys for reading/watching.

Mike, that's a great observation. Could it be modelled in the game? That would be some awesome ballistics simulation!

Mr. Kevinkis, thanks for your comment. I had that encounter in mind when I edited the scenario. I'm looking forward to play the campaign and see if something similar to your historical reference takes place.