Naval warfare strains my poor tactical skills but the feeling of accomplishment, even after a not so successful Command mission, keeps me coming back for more. Today, this devil of an scenario entitled "advanced ASW (anti submarine warfare) exercise". 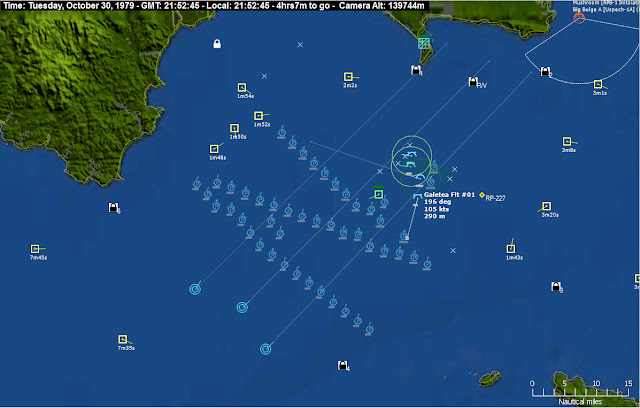 
Situation
Gentlemen it is now the final week of our training, tonight's Serial is a CASEX A24, an advanced ASW exercise. This Serial involves fixed and rotary wing aircraft, with 3 ASW Groups prosecuting at least 3 Red submarines. Aim of this Exercise is to escort the HVU RFA Grey Rover to the RV position.

Friendly Forces
Assets available are 1 Nimrod and 3 Sea Kings. Units under training at FOST are the escorting units for the HVU.

Mission
1. Escort the HVU RFA Grey Rover to the RV position safely.
2. Using all assets available, locate, prosecute and destroy all Red submarines.
3. Any submarine detected in the Exercise Area is considered Hostile.
4. Loss of the HVU is considered a mission failure.

That was the briefing and seems like a pretty simple premise: find and destroy the enemy submarines. The twist is that, in addition to torpedoes, one enemy submarine (the Charlie Class SSGN) has SS-N-7 Starbright anti-ship missiles. These missiles have a range of 35 nm or so, which means that we can be fired upon from afar. That's good news somehow, because the risk calculus tips completely against sailing through waters where enemy anti-ship missiles can fly.

That's why I decided to keep my high value unit and other ships at a distance from the submarine search area until the Charlie Class submarine is located.


Can my ships be targeted by the SSGN, though? Probably yes, but if you take a close look at the screenshot above you will notice an enemy Tu-95 in the top right corner. That enemy aircraft has off course a powerful radar, and better chances of targeting us. On the bright side I bet he will have a problem differentiating between the civilian vessels and my ships. By the way, it is good that I'm playing against the computer opponent and not against a human who can easily figure out neutral from suspicious contacts by the course and formation patterns.

Anyway, to avoid a quick identification by the enemy Tu-95 I decided to keep all my ships' sensors completely silent.

Off we go to search the enemy submarines. In this case I used a combination of passive sonobuoys deployed from the Nimrod patrol aircraft and dipping sonars deployed from Sea King helicopters. The search pattern with passive sonobuoys is an interesting topic in itself, but I used a generic one that is very well known and ages old. In the screenshot above, you will see a first line of buoys already deployed, the idea being to deploy more of them in a Z pattern across the search area.

More by a plotting mistake than anything else, I set a patrol area for my two Sea King helicopters, near a neutral surface contact (this contact eventually turned out to be a civilian ship). A few minutes later the dipping sonar from one of the Sea King helicopters detects underwater activity.


A close inspection of the screenshot above also shows that the underwater contact's is on what it looks like an interception course with the civilian ship (full yellow square). It looks like the enemy submarine is trying to determine if the surface ship is enemy or neutral, but I don't want to jump into premature conclusions. If this is what it looks like, does it mean that civilian neutral shipping through an area can be used as a smoke screen against enemy submarines search and tracking mission?

Although it has nothing to do with tactics, I want to point out that for all of the above, my only input for my task force was to set the so-called missions and adjust the mission areas for them as needed. Both the Nimrod and the Sea Kings had ASW patrol missions and areas assigned to them. To move my assets around, I just had to adjust the areas for those patrol missions. The patrol missions can be set so the assets assigned to it will target and engage enemy or suspicious activity outside their respective areas. In this scenario this option played quite well, with all the aircraft racing towards the new contacts. In the screenshot above you can see a sonobuoy (blue icon with a "P") that was thrown from the Nimrod aircraft. This was done automatically by the AI to help the targeting of the enemy submarine, even when the patrol area of the aircraft was miles away from the contact.

After an additional half hour, both the enemy Whiskey and Foxtrot class submarines were found and destroyed. One of the submarines was detected with the sonobuoys.

The most dangerous enemy submarine threat (the one carrying anti-ship missiles) made a much awaited appearance in our sensors one hour later. Detected by a Sea King's dipping sonar, the Charlie Class SSGN put out quite a show to spoof our torpedoes.

A nicely detailed write-up of your battle against the AI that renews my interest in the game as a whole.

Hi Ranger,
Good to see you here. How is going there? Are you all patched up already?

This is a great game. The features and "under the hood" stuff are just too rich to write an in-depth piece.

Hey JC, had a go at Lightning Strike yet? :)

Dimitris! How is going with the gang?

I still can't man up the time to write a well deserved review of this game ...

I will play that scenario pretty soon. :)

Taking it day by day JC…it is a long road to recovery.

Well between family matters and almost all of us being sick it's been "interesting" times. Still running towards v1.02 though :). Be sure to keep an eye on the build roll!