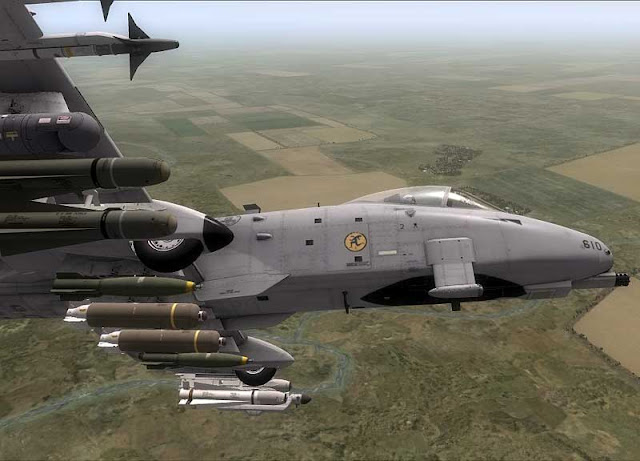 
If airspeed decreases below 210 KIAS in a pop-up attack, abort the maneuver. Base this airspeed on typical training weights and configurations. At heavy gross weight, adjust abort speed upward to provide sufficient G and turning room to recover from an adverse flight condition.

We all know that flying too slow during an attack run is a recipe for disaster, but why 210 KIAS?

I don't know if you have noticed the yellow tick mark in your airspeed indicator of your virtual A-10C, it's at 210 KIAS ... 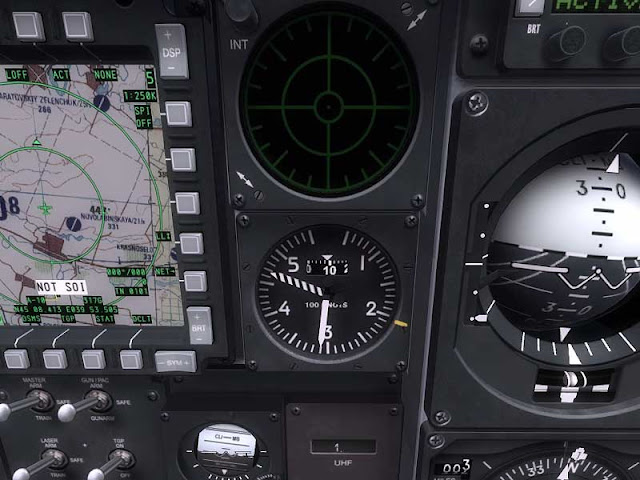 210 KIAS is not a stall speed. I have been able to fly the A-10 at speeds well below that if I trim the aircraft accordingly.

Let's take a look at the sustained turn rate performance chart of the A-10. This chart is actually is for the A-10A. To extract information from these type of charts is a bit convoluted, so bear with me for a little while.

Let's say we are flying at 250 KIAS. To know how many Gs we can pull in a sustained turn we start in the x-axis of the graph of the left (I marked this example as A1) and we go up until intersecting the barometric/pressure altitude (sea level, SL in this case) and then we trace a horizontal line from that intersection until we reach the line that corresponds with the weight of the aircraft (35,000 pounds in this example). From that point we trace a vertical line towards the x-axis of the graph in the right. We can have a sustained turn at approximately 3.1 Gs at sea level when we our bird weights 35,000 pounds and we start the turn at 250 KIAs.

Let's suppose that because of bad turning or other unfortunate circumstances of the mission, we lost 25 KIAs and we now start a second turn at 225 KIAS. From the curve above (follow the A2 traced path), we know that we would be able to pull 2.9 Gs at this second turn. Not a catastrophic loss of turning capability overall.

Now, let's imagine that we start a turn at 200 KIAS. Following the trace labeled B1 in the plot above, we predict being able to pull around 2.75 Gs. In the same way as above, by means of bad turning or something else we loose 25 KIAS and go down to 175 KIAS, our second sustained turn will be pulling only 2.1 Gs (trace B2 above)..

Bored you enough? Let me make it up to you with some simulator hands on.

I start with a custom mission in which the aircraft is loaded to a gross weight near 35,000 pounds. The combat payload is the one in the screenshot I showed above at the start of this entry.

I dived to near the ground, controlled my airspeed to around 250 KIAS and started making some turns. I closely watched out the G load indicator, hanging on the left side of the HUD. Trim was to neutral and the throttle totally opened. 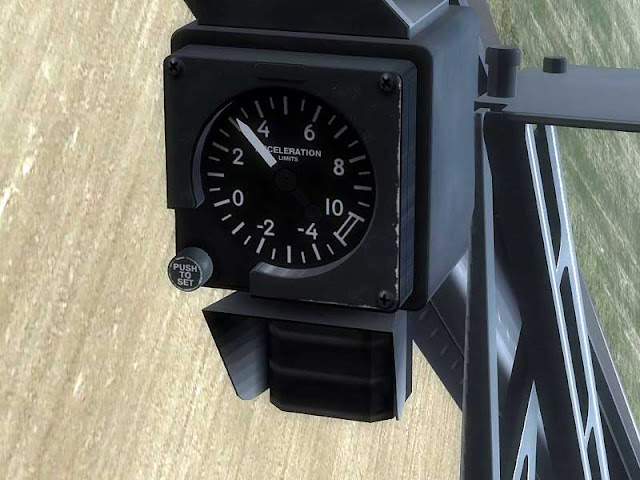 Just as the sustained turn performance curve predicted, if I keep my Gs not higher than 3 Gs, I can make some spiffy turns without loosing too much airspeed (lost around 20 knots after a 360 degrees turn). The only issue I had is getting a hold of the rudder to avoid loosing altitude. 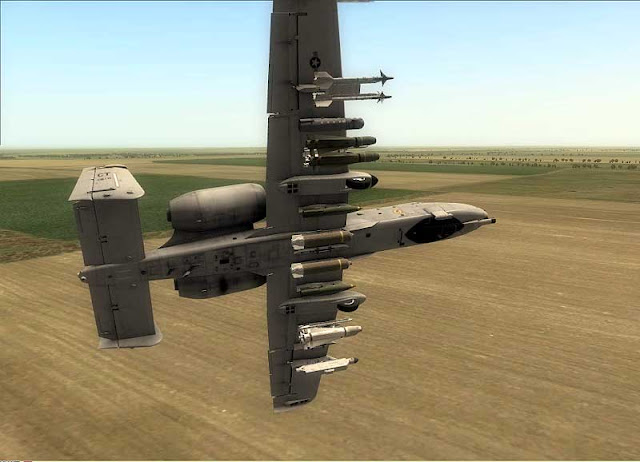 I am delighted to be able to make better turns for my combat maneuvers. I now realize that before I was pulling the stick too much and my Gs too high. At 4Gs the aircraft becomes uncontrollable after just a couple of seconds.

Now, it is unlikely that I will evade a missile with a turn of just 3Gs. All of the above is for sustained turns and not for instantaneous turns. But as I mentioned in the previous paragraph, at least in my hands a 4 Gs turn lasts for just two seconds. Any ideas?

Wow now I remember why I am so bad at flight sims. I am just too dim witted.

Great post, thanks! It's amazing to me that after so many years of flight simming, articles like this make me realize how inordinate has been the amount of attention I've put into avionics and weapons systems as opposed to just FLYING. On your suggestion I got "Stick and Rudder" for Christmas, and am looking forward this year to learning how to fly all over again with the A-10C in DCS.

Excellent read. I've yet to pick this one up but please continue with the great blogs - I learn a lot each time you have one of these.

Thanks for your comments, gents!

@ BluntForce: Meh! If you can wargame you can do anything! :)

@ GregP: Excellent! I love that book. Isn't it cool that there is always something new or a new perspective to watch our sims from? Let us know how it goes.

@ Chris: Thanks for your kind words, more will be coming soon.