This series of entries are focused in attack helicopter tactics at the individual level. Off course, attack helicopters almost never take-off to combat individually. At a later time, I will expand this series to tactics to be used at the platoon level. On the meantime, the tactical principles in this primer will help you to fly as a part of a formation.

This series of entries are based in stuff I gathered on the web. I condensed and adapted most of the stuff found and I encourage you to check those original sources. The sources will be cited at the end of each installment.

Flying to the objective

If you are a virtual pilot of fixed-wing combat aircraft, it’s time for a paradigm shift. You are used to dive majestically from the blue with your wings pregnant of fire and the arrogant attitude of a God that entertains himself dealing death to the poor earth-laden mortals. Those times are gone. You are now like a hero of the ancient Greek mythology, half-god and half-mortal. The earth where the soldier lives and dies is now your life and death. The eternal paradoxes of tactical land combat are now your salvation and perdition. Being pilot and soldier at the same time will require the most from your abilities and intelligence. This is your time of greatest glory.

One way to avoid detection by using terrain as cover is the so-called “nap of the earth” (NoE) flying. In NoE flying, the pilot flies at approximately 6-7 meters above the ground and at a speed of 90 Km/h. The vast majority of modern radar systems cannot detect targets flying at a very low altitude. In addition, Doppler-based radars are designed to ignore returns moving at speeds of less than 100 Km/h in order to avoid detecting civilian traffic. During a NoE flight, the pilot chooses a route that allows the maximum terrain cover. The base of hills, around (not over) elevations and behind crowded terrain is ideal for NoE flying. In mountainous terrain, attack helicopter pilots usually fly at an altitude that is halfway between the base and the top of the mountains. 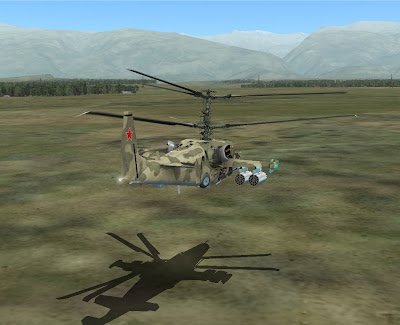 As exhilarating as dangerous, NoE flying requires a lot of concentration.
NoE flying is not problem-free. The slow speed and the low altitude expose the attack helicopter to small-arms fire and un-guided rockets. An alternative to NoE flying is “contour-chasing” (CC) flying, which is done at higher altitudes and speeds. CC flying is used when the presence of enemy anti-aerial or aircraft is less likely. For a CC flight, the pilot maintains an altitude of 12-15 meters and a speed of 150 Km/h. The pilot doesn’t fly around the hills but rather maintains a straight course, keeping a constant altitude above the ground. 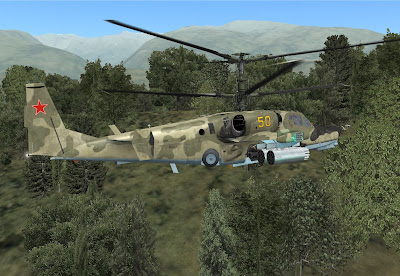 CC flying has the advantage of higher speed at the expense of concealment
Coming up next, “10 Rules to Live by”

Source for this entry:

AHOY, my specialty is infantry, but I do enjoy aerial combat too. I found the info about Doppler radars (designed) I believe you meant programed to ignore traffic under 100 Km.per hr.interesting. I have a question about another tactic one could use to exploit that feature, however I'll look around you may have already covered it in a fixed wing post. G-day!

Thanks for your comment and sorry for the late response.

You are a marine, I see from your blog. Thanks for your service to the country!

About the Doppler radars, I think that AWAC assets can switch that feature on and off. There is a famous picture of an AWACs screen showing masses of Iraqi armor during the first Gulf War.

I actually never tried to exploit this on DCS Black Shark.

AHOY, I would bet your right about the AWACS and J-STARs too for that matter. Hope I got that acronym right. IMO with electronics just about anything is possible. I've never played any of the games before. I've been occupied lately and have not had the chance to read more of your post, hope to do so soon. Thanks for your reply, Keep up the good work. G-day!

AHOY, Newjarheaddean here, had to use anonymous I.D. above, due to the fact I don't recall having to provide password on my first commit and nothing I tried worked, anyways having problems on any site I return to is quite normal for me. ANY SITE and EVERY SITE, including my sites, lol. G-day!

Thanks for your comments.

In simulations these type of things can be sometimes overlooked. I cannot confirm to which extent Doppler radars in DCS Black Shark are accurately modeled. But I have to tell you I would be surprised if not. Man, you have to see the global positioning in DCS Black Shark: the links with satellites that are too close to the horizon are lost if you are masked by a high mountain. This simulation sometimes blows my mind.

I really like Helicopter. It is a interesting piece of technology because of the characteristics that you mention and they are better to do support for soldiers.

The graphics are great in this!