Fighting armed religious radicals in the fence-less backyard of a former acquaintance who is now politically bankrupt is like crashing a bar fight crowded with drunkards. Welcome to present-day Syria! 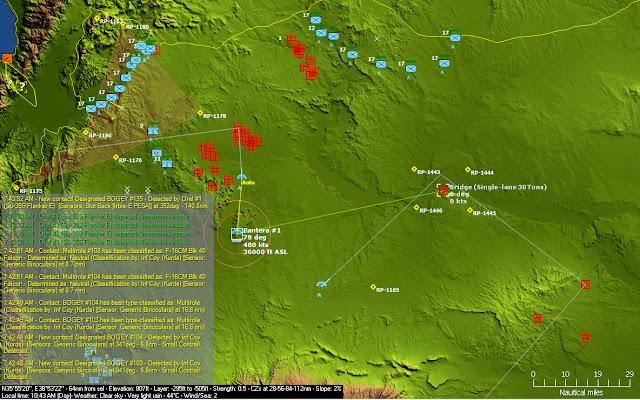 Welcome to yet another winner DLC for the awesome Command Modern Naval Operations. The Old Grudges Never Die DLC requires just the base game (i.e. Northern Inferno not required). Priced at US $2.99, the DLC is a Syria/ISIS/Russia/Turkey/NATO single scenario that lasts 24 hours of simulated time. The player can take command of either the Russian or the Turkish forces.

First off, the versatility of the Command engine is fantastic. In this scenario that I am playing as the Russians, I target religious radicals, try to not piss off NATO, and keep my forces on alert against Turkey, who is borderline hysteric with my presence in Syria. On top of that, I try to figure out what the Syrian Air Force is up to (they never tell me). I applaud the design of this scenario, with no prescriptive "bread crumb trail of known objectives" that the player has to cover to achieve victory. This is an scenario that encourages free exploration on operational art in the air and in the sea.

Old Grudges' has a very thorough set of scripts and triggers under the hood. Just the orders of battle of the several sides present in the scenario are worth the price of admission.

Old Grudges is a proof that the engine can be used for professional-level rapid prototyping of contemporary conflicts. If you look beyond the technical specifications of the war toys (not implying that I consider anything to be wrong in CMANO's database), Old Grudges is chock-full of  important issues in command, operational art, plus rapid and effective deployment for emerging threats.


Old Grudges has a lot to offer for a very small price. The complexity of the scenario is moderate but very manageable. The type of decisions the player has to make is spot on. Playing as the Russians, most of the time I had to share airspace with French, US, Syrian attack aircraft. Tracking down those bogeys coming from Turkey is always a thrill. On the naval front, keeping a fine balance of assertiveness while not looking into confrontation with Turkey seems like the best option. Unfortunately for me, the Turkish Navy is on a very bellicose footing.

Just purchased. Can't wait to give it a whirl.