Although it was clear to me that assault guns like the StuG IIIG are not the same as self-propelled artillery (Wespe, Hummel vehicles), I think I was utterly wrong about storming and breaking through a defensive line with a combined infantry-assault gun team moving up simultaneously. 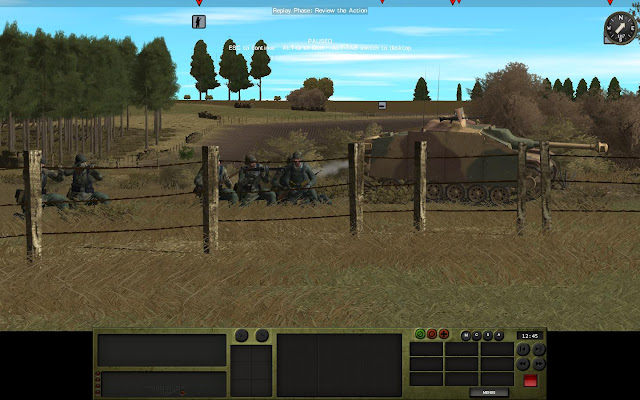 The StuG IIIG has a narrow field of fire and lacks the ability to shift it rapidly as tanks do. Unexpected fire from the flanks is one of the most scary liabilities of these assault guns.


In this after action report, I placed my StuG IIIGs in a relatively safe support by fire position and let the infantry roll with the close assault. 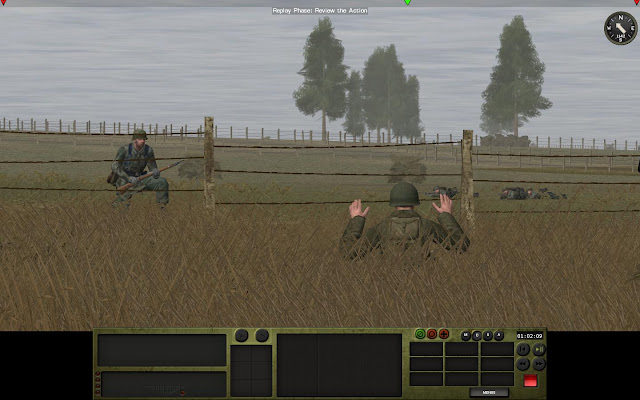 The battle ended with a German victory. The US suffered 54 casualties, the Germans 22. All infantry.

The major battlefield killers were:
- For the German side the StuG IIIGs scored 37 infantry kills and two AT guns knocked out.
- For the US side, the .50 cal HMGs inflicted 11 casualties.

The Wespe vehicles failed to score a single victory. I know this weapon system is most effective in the indirect fire mode, but yet I was expecting a bit more from them. Due to their poor armor and open crew compartment, I didn't dare to move them forward.

The assault guns -which most of the time fired at target areas instead of identified targets- made the day. It is noteworthy that the StuG IIIGs have a limited amount of HE rounds, so it is advisable to use them wisely if a long fight is anticipated. I don't know how wise it was to keep them back in a support by fire position, but I'm guessing that if they would have accompanied the infantry, enfilade fires from the US AT guns would have been catastrophic.

It was not a cheap victory, but it would have been impossible to crack open this US defensive position without the help of the assault guns.

Well I would respectfully disagree on the notion that the StuGs were hard to turn their fire.
Actually it was quite the opposite. A good crew could make a 90 degree turn faster than it was possible for a 90 degree turrent turn on the Tiger. In fact good Tiger crews were rather making tank turn than the turrent turn as it was faster (and many crew members served in StuGs).
StuGs used properlly were a formidable enemies for their firepower and low profile. But they needed a good crew and tactics.
Chris Adamus

Very interesting. What scenario ist this?

Hello folks and thanks for your comments.

Chris, thanks for your feedback. Very interesting. Does it work that way in game?

TSS: is a custom scenario that a blog reader sent me for testing. It will be up in the repository, I think.

@Chris
Terrain is a mitigating factor. Mud, tight spaces, walls, and slopes can definitely hinder the freedom of turning the hull. Get stuck and lose a track with no turret and you're screwed. In most cases, I wouldn't use these types of vehicles in a dogfight. I'd keep them back as far as possible and I'm sure that's how they were designed to be used.
-tFS

Everything I've ever read says the lack of a turret was a big liability in anything but defensive ambush situations. I'll try to find some actual primary references but I know I've read this countless times. The ability to move and "cover" a certain direction is also lost with a turret-less vehicle.

Erich, but a turretless tank is much, much cheaper and faster to build than a "real" tank. That was quite important for german economy at the time. The Sturmartillerie came also in being at a time when Germany tried to raise their Panzer Divisions. So there was a competition between tanks and Stugs.
If you can read german heres a nice thesis regarding Sturmartillerie
http://portal-militaergeschichte.de/sites/default/files/pdf/wettstein_sturmartillerie.pdf

And here a very good YT video about Stugs https://youtu.be/tFXZcC1xZnI

Not just a turret-A POWERED turret.

@JC
My CM is rusty but as far as I remember it was not well implemented.

@Erich and Anonymous
And when driver is knocked out then you cannot drive... I hope you get the point ;)

StuG was not a tank. It was a support weapon mainly. The lack of turrent was not a big problem as the knowledge of how to use StuG was there in 1943-44. It was a formidable enemy for Allied tanks as it had low profile and quite powerfull and accurate gun.

I know everybody has Tigers in front of their eyes but most of it it's just German war propaganda. Historically there were only used for offensive in numbers only couple of times.

Wonder the original mission designer did not think to include the StuH 40 with same 105mm gun, instead of the highly unrealistic Wespe, which you´d rarely ever seen near the frontlines.